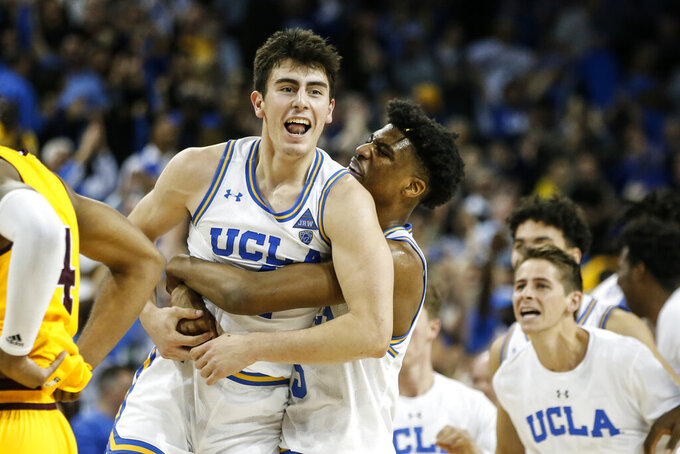 FILE - In this Thursday, Feb. 27, 2020, file photo, UCLA guard Jaime Jaquez Jr., left, celebrates with a teammate after the team's win over Arizona State during an NCAA college basketball game in Los Angeles. The first-place Bruins own a half-game lead over Oregon and can clinch at least a share of the league crown with a victory at crosstown rival Southern California on Saturday, March 7, 2020. They haven't won the regular-season title since 2012-13. (AP Photo/Ringo H.W. Chiu, File)

LOS ANGELES (AP) — UCLA is the hottest college basketball team in the country after failing to create a ripple in the early months of the season.

The Bruins (19-11, 12-5 Pac-12) are tied with Oregon for the conference lead and can clinch at least a share of the league crown with a victory at crosstown rival Southern California on Saturday. They haven't won the regular-season title since 2012-13.

"We don't want this to stop because this feeling is great," freshman guard Jaime Jaquez Jr. said. "We don't want it to end anytime soon."

UCLA has already earned a bye in the first round of the Pac-12 Tournament next week in Las Vegas. The Bruins can claim one of the top three seeds depending on the outcome of this week's games.

All of this hardly seemed possible as recently as Jan. 17 when the Bruins were tied for last place.

First-year coach Mick Cronin publicly challenged his players after a loss to Stanford dropped them below .500. He blasted their lack of defense, even questioning whether they deserved to have UCLA on their chests.

"When the going gets tough, we have some guys who will fold," he said in mid-January. "As the game goes on, our softness shows up."

Cronin wasn't beneath using one of the oldest motivational ploys in the book on a group of mostly freshmen and sophomores that struggled early to implement the hard-nosed defense his reputation was built on.

"The hardest thing as a coach to do is to change the DNA of a program," said Cronin, who succeeded the fired Steve Alford. "I say that with all respect because Steve won a lot of games. They just did it differently. They scored a whole lot of points."

Alford's most recent teams were criticized for a lack of defense and togetherness. Some of those same players have blossomed under Cronin.

"We don't have an all-league player," Cronin said. "We have a bunch of young guys. Even our old guys, they've never been in a lead role. We don't have a leading man."

UCLA won a record 11 national championships on the strength of guys known by their last names: Alcindor, Goodrich, O'Bannon, Walton, Warren and Wilkes, among others.

Cronin has gone out of his way to rally the old guard Bruins around the current bunch, hosting preseason parties at his house and making former players feel welcome at practices and games.

In turn, he's fostered an atmosphere of accountability to each other.

"Our players have become a team," Cronin said. "Our guys are playing to win. They care about each other and they've learned to never give up. They refuse to surrender and I think that's the key to our run."

The Bruins seem to have grasped Cronin's message that to win they have to play defense. UCLA is 18-0 this season when holding teams to 73 points or fewer.

"His message has always been the same: just believe in each other and keep practicing hard," redshirt freshman guard Tyger Campbell said.

The roller coaster of a season has included the Bruins' first win over a ranked opponent (No. 20 Colorado) in nearly two years and a sweep of rival Arizona for the first time since 2012-13, along with home losses to Hofstra, Cal State Fullerton and USC that could haunt them come Selection Sunday.

The Bruins were picked by the media to finish eighth in the league and their fans are still finding their way. UCLA averaged fewer fans at home (6,706) than on the road (8,522).

The Bruins would love nothing more than to close out the regular season with a win over the Trojans, who came into Pauley Pavilion and took a 74-63 victory on Jan. 11 when UCLA was in the midst of losing six of seven.

UCLA has lost just once since the beginning of February, while USC is 4-5 during that span. The Trojans (21-9, 10-7) are coming off a sweep of the Arizona schools last weekend, which kept them in the picture for an NCAA Tournament berth.

Short of winning the Pac-12 Tournament title and its automatic berth, the Bruins could miss the NCAAs in consecutive years for the first time since 2003-04.

Still, they've overcome a lot in a few short months with a new coach and a starless roster.