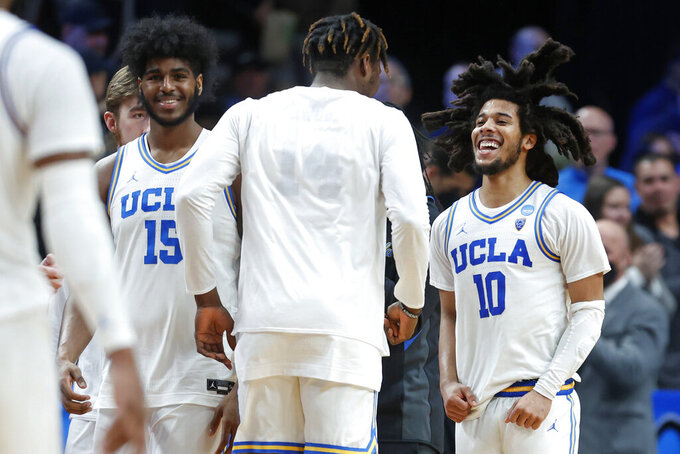 PORTLAND, Ore. (AP) — Tyger Campbell scored 16 points and fourth-seeded UCLA completed a more conventional path to the Sweet 16, beating fifth-seeded Saint Mary’s 72-56 in the second round of the NCAA Tournament on Saturday.

UCLA (27-7), which went all the way from the First Four to the Final Four last season, will face eighth-seeded North Carolina on Friday in the East Region semifinals in Philadelphia. The Tar Heels are the more surprising half of that blueblood pair after they beat defending champion Baylor earlier Saturday.

“We love to go out there and compete and we're just playing to win,” Johnny Juzang said. “It's the best feeling, especially in March, man. We have so much fun.”

The Bruins lost star Jaime Jaquez Jr. to a right ankle injury with 6:58 in the game. He winced as he was helped off the court by teammates and later returned to the bench with his ankle wrapped in ice. Jaquez finished with 15 points, all in the first half.

“We've got until Friday until we play,” coach Mick Cronin said. “Jaime, if he can walk, he'll play.”

Logan Johnson scored 18 points for Saint Mary's (26-8), the only team in the West Coast Conference to beat No. 1 overall seed Gonzaga this season.

“It wasn't one of our better games, and you need to play well against a team like UCLA in the second round of the NCAA Tournament,” Gaels coach Randy Bennett said.

The Bruins took a 36-29 lead into halftime but the Gaels closed within 38-37 early in the second half on Alex Ducas' 3-pointer. Jules Bernard hit a 3 and a layup that pushed UCLA's lead back to 48-41.

Juzang made three consecutive jumpers that put the Bruins up 54-44 with 9:41 left and UCLA pulled away, leading by as many as 18 points down the stretch. Juzang finished with 14 points.

The Bruins were tested in the opening round against No. 13 seed Akron. The Zips led at halftime but Campbell came to the rescue with eight straight points late in the second half for a 57-53 victory.

Saint Mary's hit three 3-pointers to jump out to an early 16-9 lead. But the Bruins adjusted to the Gaels' crafty offense, shutting them down with physical defense — and an 11-2 run put UCLA in front 24-22.

Saint Mary's was 0-for-12 from the field and had three turnovers during a stretch of more than six minutes toward the end of the half.

“Our story should not have ended here,” said Mattias Tass, who scored 14 points. “But unfortunately it did. We didn't play that great of a game. In these arenas, in these situations, you have to play good to win these games.”

UCLA was scheduled to play North Carolina this season in Las Vegas, but the Dec. 18 game was canceled.

“We all got COVID in December. I went down first, then it was Jules, and it just started down the line,” Cronin said. “We were supposed to play in Vegas but now we're just going to play in Philly with the season on the line.”

Saint Mary's: The Gaels downed all three of their common opponents with UCLA — Oregon, Gonzaga and Bellarmine. The Bruins fell to Gonzaga and twice to the Ducks. The 18th-ranked Gaels earned their highest seed in 11 NCAA Tournament appearances but fell short of their first Sweet 16 appearance since 2010.

UCLA: The Bruins are 11-2 all-time against Saint Mary’s, but the teams had not played since 1990. ... UCLA is making its 51st tournament appearance. The Bruins have a record 11 national titles.