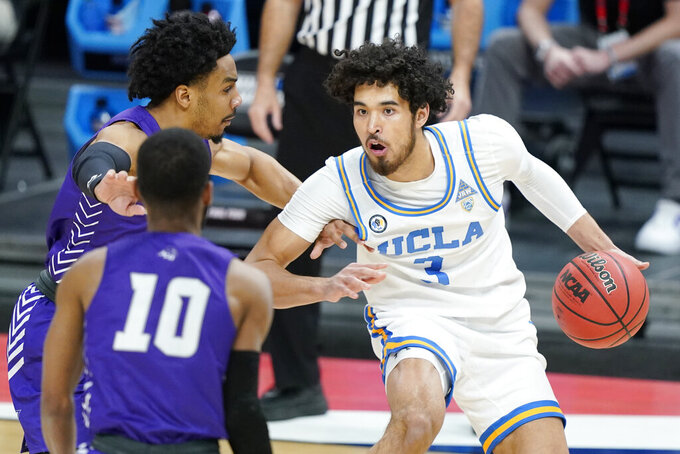 UCLA's Johnny Juzang (3) is defended by Abilene Christian's Coryon Mason, left, and Reggie Miller (10) during the first half of a college basketball game in the second round of the NCAA tournament at Bankers Life Fieldhouse in Indianapolis Monday, March 22, 2021. (AP Photo/Mark Humphrey)

LOS ANGELES (AP) — UCLA and Southern California games are usually late-night viewing for most college basketball fans during the regular season but both programs have prime time spots for the second weekend of March Madness.

The Los Angeles schools are among four Pac-12 teams in the men's Sweet 16, the first time since 2007 and third time overall that the Bruins and Trojans have both made it to the regional semifinals in the same tournament.

“To see UCLA, USC and all the other conference teams having this excellent success throughout this tournament, it’s just very satisfying and inspirational,” said former UCLA great Bill Walton, who announces games for ESPN and the Pac-12 Network.

Most of the country might be shocked about the Pac-12′s success, but UCLA coach Mick Cronin isn’t one of them.

“I coached in the Big East in the heyday, 11 teams in the NCAA Tournament (in 2011), so I know good teams,” said Cronin, who is in his second season in Westwood after 13 years at Cincinnati. “Teams in the Pac-12 play hard. We have excellent coaching. It’s way more competitive physically than the rest of the country knows because most people are sleeping when we play.”

The conference is assured of at least one team in the Elite Eight with USC (24-7) facing Oregon (21-6) in a West Region matchup Sunday night. UCLA (20-9) also plays Sunday when it meets Alabama (26-6) for a spot in the East Region final.

The Bruins and Trojans are crosstown rivals but both have built tournament runs on similar traits — strong coaching, great defense and local players leading the way.

Cronin is one of only five coaches to direct teams to the last nine tournaments. The Bruins appeared to be in for a short stay when they trailed Michigan State by 14 in the first half of their First Four game, but they rallied for an 86-80 overtime victory.

Over the last five halves and overtime, which also includes wins over BYU and Abilene Christian, the Bruins are holding opponents to 38.8% shooting from the floor.

“We’ve continued to try to get better at the things that go into winning, whether it’s executing and taking care of the ball on offense, being physical and rebounding, and being the better defensive team,” Cronin said.

USC's Andy Enfield was the Pac-12 Coach of the Year after the Trojans were ranked for the final month of the regular season. This is the fifth time in eight seasons he has directed the Trojans to more than 20 wins.

USC demolished Kansas 85-51 on Monday, which marks the biggest win by a team over the Jayhawks in NCAA Tournament history. The Trojans held Drake and Kansas to 29% shooting in both games.

“USC basketball is on the rise. Over the last 80 years, it’s been like a roller coaster. A lot of great players, coaches and teams, but we’re trying to build the program and sustain the success,” Enfield said.

Both teams are winning with rosters featuring area players. USC's Evan Mobley — who was raised in Riverside County — is the first player in conference history to be named Player of the Year along with capturing top defensive and freshman honors. The only other player to do that from a Power Five conference was Kentucky's Anthony Davis in 2012.

Mobley is expected to be the second straight USC player to be a lottery pick in the NBA draft.

UCLA sophomore Johnny Juzang, a Tarzana, California, native who began his career at Kentucky before transferring back home, is the first Bruins player since Reggie Miller to score 20 points or more in his first two NCAA Tournament games.

“Seeing players from California and Southern California on the rosters shows local guys that they can get on a national stage,” UCLA athletic director Martin Jarmond said. “That is good and positive to not only our two schools but the conference. Kids want to win and they are seeing these are winning programs and that they can be successful here.”

Juzang and Mobley both played for the Compton Magic AAU team while in high school. The program has eight former players competing this weekend, with four at UCLA and three at USC. The 2018 team was Adidas' top AAU squad that season and beat Nike's top team for bragging rights.

“It’s awesome not only to see your kids play for top programs, but when they decide to remain at home. It’s great for the families and for all of us,” said Compton Magic founder and CEO Etop Udo-Ema.

USC and UCLA will face stiff challenges Sunday. The Trojans defeated Oregon in their lone meeting this season, but the Ducks played two fewer conference games due to the coronavirus and won the regular-season title by a half game.

Many also think the matchup is happening one round too soon and that one of the teams should have been on the other side of the bracket. Pac-12 Commissioner Larry Scott said the matchup is a double-edged sword.

“It's disappointing that one is not going to have a chance to go on. By the same token, Sunday night is going to be an incredible showcase for the conference,” he said.

The Bruins will face an Alabama squad that leads the nation in 3-pointers made this season (341) as well as averaging 9.3 steals during an eight-game winning streak.

With the Lakers and Dodgers bringing championships back to Los Angeles within the past six months, USC and UCLA are hoping their runs can eventually end with the same result.

“That’s a standard. Any level of competitiveness is contagious, and it drives you,” USC athletic director Mike Bohn said. “When you see those other teams doing well, it inspires you.”