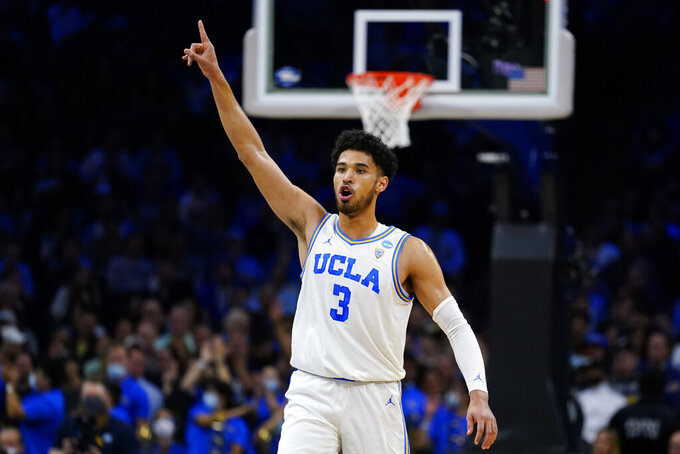 UCLA's Johnny Juzang reacts during the first half of a college basketball game against North Carolina in the Sweet 16 round of the NCAA tournament, Friday, March 25, 2022, in Philadelphia. (AP Photo/Matt Rourke)

LOS ANGELES (AP) — UCLA’s Johnny Juzang, one of the stars of the 2021 NCAA Tournament during the Bruins’ run to the Final Four, is entering the NBA draft.

Juzang averaged 15.6 points and 4.7 rebounds last season, when the Bruins lost to North Carolina in the Sweet 16.

In 2020-21, he helped the Bruins to a 22-10 record and their first Final Four appearance since 2008. He averaged 22.8 points in six tournament games and was named to the All-Tournament team. His 137 total points were the second-most by a UCLA player in tournament history.

“What a ride it's been,” Juzang wrote on Instagram. “Last year's run to the Final Four, and this year's electric season and atmosphere at Pauley Pavilion, were so much fun to be a part of. Growing up in Los Angeles to then doing Los Angeles proud is more than a kid could ask for.”

Juzang declared for the draft last year, but ultimately decided to return to Westwood in the hopes of adding to the school's record 11 national championships.

He struggled with injuries, however, missing one game with a sore hip after a scooter accident and two more with a sprained ankle. He also tested positive for COVID-19 late in the season.

“Johnny has been tremendous for us during his two seasons in Westwood,” coach Mick Cronin said. “We will miss him."

Juzang began his college career at Kentucky before deciding to transfer to be closer to his Tarzana home, not far from the UCLA campus.

Juzang's departure puts the spotlight on Jaime Jaquez Jr., who said he will return for his senior year.

Watson hired an agent. Bernard hasn't hired an agent, however, leaving open the possibility of returning for an extra season as allowed by the NCAA as a result of COVID-19.

The Bruins also lost reserve guard Jake Kyman, who said he is transferring.