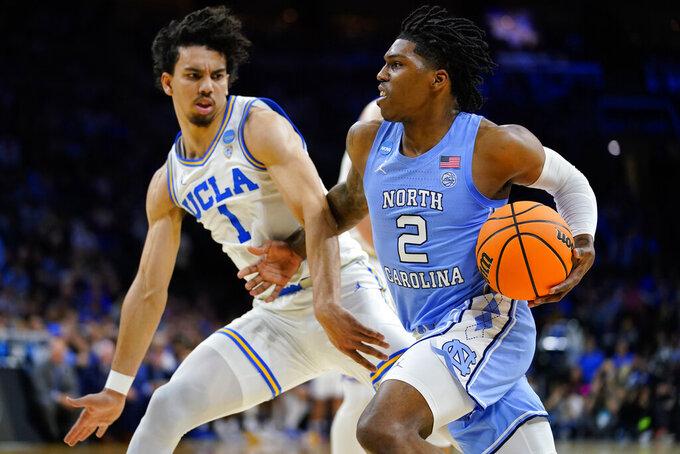 North Carolina's Caleb Love, right, tries to get past UCLA's Jules Bernard during the second half of a college basketball game in the Sweet 16 round of the NCAA tournament, Friday, March 25, 2022, in Philadelphia. (AP Photo/Matt Rourke)

LOS ANGELES (AP) — UCLA guard Jules Bernard has declared for the NBA draft, although the senior won’t hire an agent to preserve his eligibility.

Bernard has one year of eligibility remaining after the NCAA allowed an extra year because of the COVID-19 pandemic.

“We are supporting Jules every way that we can, and we are excited for him to go through his evaluation and workout process over the next month," coach Mick Cronin said. "Should Jules decide to play as a super senior, we would be absolutely thrilled to have him back in Westwood.”

The Bruins also lost reserve guard Jake Kyman, who said he is transferring.

Jaime Jaquez Jr. said he will return for his senior year.