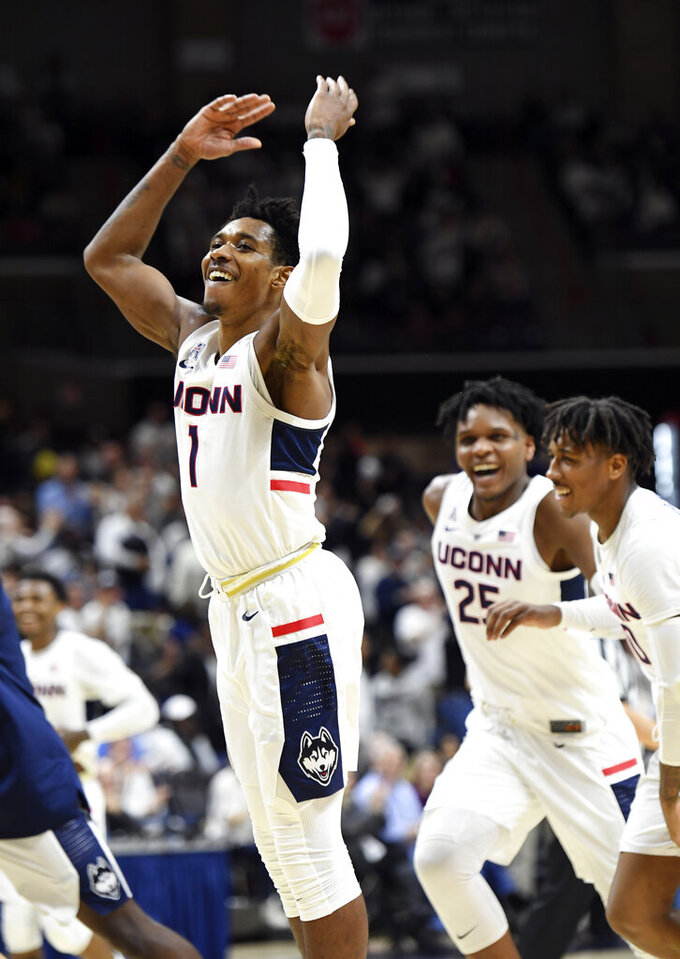 Connecticut's Christian Vital (1) celebrates after making a long 3-point shot at the buzzer in the first half of the team's NCAA college basketball game against Wichita State on Saturday, Jan. 26, 2019, in Storrs, Conn. (AP Photo/Stephen Dunn) 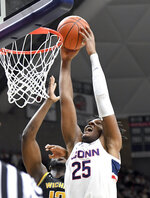 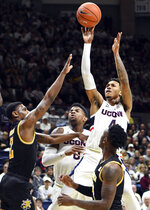 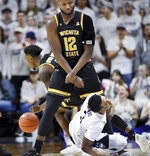 STORRS, Conn. (AP) — When UConn is getting good guard play, the Huskies are hard to beat.

Christian Vital scored 21 points and Jalen Adams added 19 points and 12 rebounds Saturday to lead the Huskies to an 80-60 win over Wichita State in the American Athletic Conference.

The pair combined for 16 baskets on 29 shots (55 percent), 17 boards, eight assists and just one turnover, by Adams.

"I feel like we kind of have the best chemistry in the country," Vital said. "Just because we know each other's game so much. We know where we want the ball and then, as you saw, when it's time to take over, we can do that together."

Tyler Polley added 12 points and Josh Carlton 11 and four blocks for the Huskies (12-8, 3-4 American), who have won two straight games for the first time since mid-December.

Vital opened the game with a steal and layup and UConn ran out to a 10-0 lead.

It took the Shockers more than five minute to score their first points. Those came on a pair of free throws by Samajae Haynes-Jones. It was another two minutes before they scored their first basket on a driving layup from Dexter Dennis.

A long 3-pointer by Vital at the halftime buzzer gave the Huskies a 43-28 lead.

UConn stretched the lead to 19 early in the second half, before point guard Alterique Gilbert (five points, six assists), reinjured his surgically repaired left shoulder running in to a screen set by Morris Udeze and left the game.

The Shockers cut the lead to 12 before the Huskies regrouped and put the game away, pushing their advantage to 26 points late in the game.

"A great group of guards can cover up a lot of other things that maybe you don't necessarily have" said UConn coach Dan Hurley. "And obviously, we're seeing a different level of play from Jalen and Christian and Al."

Wichita State: The Shockers, who have been to seven straight NCAA Tournaments, were coming off their worst offensive game under Gregg Marshall, a 41-point effort in a 13-point loss to South Florida. They continued to struggle in this one, shooting just 34 percent, including 29 percent in the first half.

"We have a very young and inexperienced team that struggles to score," said Marshall. "You've got to make shots."

UConn: Hurley said Gilbert's injury is not believed to be too serious, though he will undergo more tests and may miss the Huskies next game. ...Forward Mamadou Diarra, who has been out all season with a knee injury, saw his first action late in the second half and scored two points.

UConn's highly touted recruit Akok Akok spent his first game on the bench as a second semester walk-on for the Huskies. Under NCAA rules, the 6-foot-9 forward won't be eligible to play until next season because he was recruited by the school and is receiving financial aid. He is practicing with the team with the expectation that he will play in the fall as a redshirt freshman.

Polley was matched up on Wichita State star Markis McDuffie, who came in averaging more than 19 points a game. The Shockers star scored just nine Saturday on 4-of-14 shooting. Polley, who had been struggling offensively, was 4 of 8 from the floor, and made three of his five 3-point shots.

"Because he was thinking so much about his defense, he took pressure off himself at the offensive end,'" Hurley said. "He wasn't ruminating so much on missed shots because he had to focus on guarding a top-level player."

Wichita State: The Shockers return home for two games, the first on Wednesday against SMU

UConn: The Huskies travel to Orlando for a game Thursday at UCF, which beat the Huskies by 12 points in Hartford earlier this month.