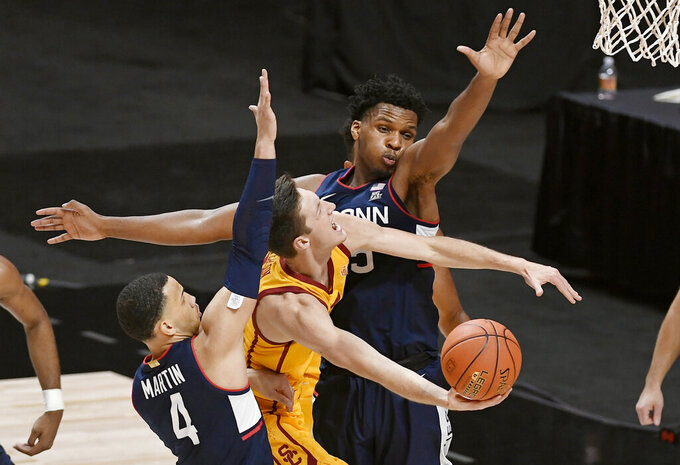 UNCASVILLE, Conn. (AP) — James Bouknight scored 18 points and Connecticut lead most of the way and held off Southern California in a 61-58 victory in the Legends Classic on Thursday night.

Bouknight's 3-point play capped the scoring for UConn (3-0), which had a six-point lead with four minutes to play. But USC (3-1) ended the game missing 7 of 8 shots, including three consecutive in the final 12 seconds. Drew Peterson missed a layup and Noah Baumann and Evan Mobley each missed 3-point shots.

Bouknight was 5 of 15 from the floor and made three of the Huskies' seven 3-pointers. Tyrese Martin added 11 points and Isaiah Whaley had 10 points and blocked five shots. UConn outrebounded the Trojans 42-31, with Josh Carlton grabbing a game-high 11.

Mobley, a freshman forward who was named to the Wooden Award Preseason Top 50 Watch List on Tuesday, lead the Trojans with 17 points on 4-of-10 shooting from the floor and had seven rebounds.

The Trojans had their last lead, 27-26, with about seven minutes remaining in the first half.

It was the first meeting between the teams, and the first regular-season game for the Huskies at Mohegan Sun Arena.