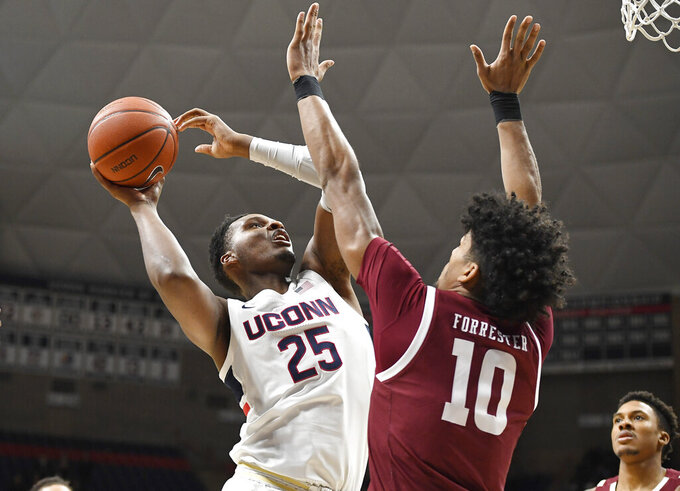 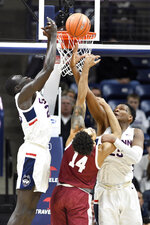 STORRS, Conn. (AP) — UConn fans got a glimpse Wednesday of what the future may hold for the Huskies.

Dan Hurley started three freshmen and Connecticut responded with a 78-63 win over Temple in the American Athletic Conference, snapping a four-game losing streak.

“I just thought we showed the character, the toughness, the identity that we're building as a program here,” Hurley said.

UConn, which had been beaten by six points or fewer in every game during its recent skid, never trailed in this one.

The Huskies held the Owls scoreless for a 5 1/2 minute stretch in the first half, opened up an 18-point lead and went into halftime up 36-21.

A steal and tomahawk dunk by Bouknight made it 53-31 and the Huskies extended that to 24 points.

UConn was led by its defense. The Huskies blocked seven shots and forced 16 turnovers that led to 20 points.

“We were just in the right spots and we were smart,” Hurley said. “We stole deflections and we didn't take a lot of high risks.”

Carlton, who was held scoreless in the Huskies last two games, opened the scoring by grabbing an offensive rebound and making a strong move to the basket. He had the Huskies first four points.

“I think the way Josh started the game really gave everybody a boost,” Vital said. “Because once we knew we were going to beat them on the inside, it kind of like freed up the guards to attack, knowing they had to think about Josh.”

A driving layup by Vital completed an 8-0 run that gave the Huskies a 12-4 lead. He extended the advantage to 10 points at 18-8 when he was fouled shooting a 3-pointer from the left wing and completed the four-point play.

Temple came into the game averaging just 67.9 points and shooting 40% from the floor. They shot 39.7% in this one.

“This has been a struggle for us all year,” said coach Aaron McKie. “You would hope that at some point we could find a way or find a game where we can make some shots. And it just hasn't happened for us. ”

UConn played the game shorthanded. Forward Sidney Wilson (4.5 points per game) suffered a knee bruise in the Huskies' loss to Tulsa on Sunday. Starting point guard Alterique Gilbert (9.4 points per game), who was benched for most of the second half after some poor play against Tulsa, sat out Wednesday “for personal reasons.” Hurley declined to comment on what those might be or when he might return.

“We've been talking about this for a long time,” Gaffney said. “We know what we're capable of. We know we can start. We can play with the best of them. It was just good to see that today."

UConn had its own shooting issues, hitting just 35.5% from the field. But despite pulling down only two more rebounds than Temple (39-37) the Huskies had 20 second-chance points to just nine for the Owls. Akok had four of the Huskies blocks, giving him 61 for the season.

UConn begins a two-game road trip in Memphis on Saturday.