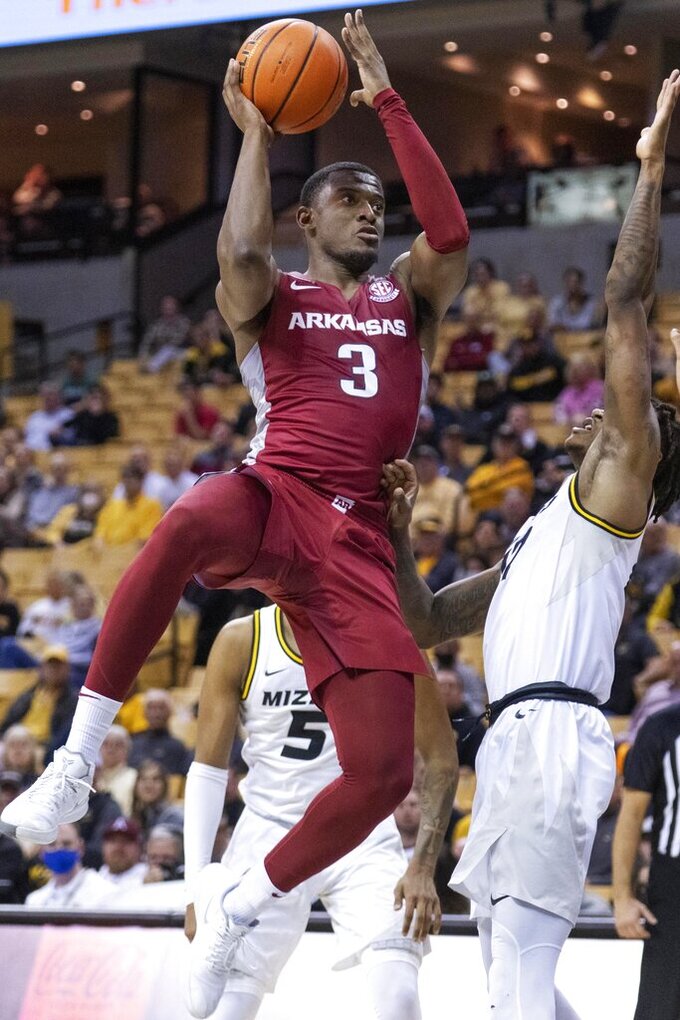 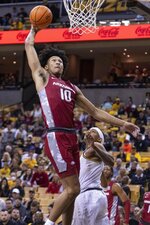 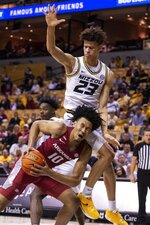 “He’s a really tough cover, because he can shoot the ball and he can also score inside,” Arkansas coach Eric Musselman said of Umude. “Then when you add that he’s really stroking the ball with a high percentage from 3, and he opens dribble drive angles for other players.”

“We’re real tough to beat when we’re clicking like that,” Umude said. “When we’re trusting each other and moving the ball like that, we’re going to be hard to beat.”

Arkansas built a 46-27 halftime lead behind the 3-point shooting of Umude and Davis, who combined to make 6 of 9 shots from beyond the arc. Missouri cut the deficit to 11 points twice in the second half but never seriously threatened Arkansas.

Musselman said Saturday’s one-point loss at Alabama that ended his team’s nine-game winning streak had haunted him for a few days. His players seemed less affected.

“I haven’t slept much since that Alabama game,” Musselman said. “I’ve been in a really crappy mood and didn’t want to pet my dog and didn’t want to talk to anybody. The guys put it behind them, and I’m really impressed with the mental makeup of the group right now.”

In the previous two games, Wade had produced a combined zero points and two rebounds. His coach challenged him to made a bigger impression against Missouri.

“We’d been joking with him and told him to enter the boxscore,” Musselman said. “We play him even though he might have a lot of zeroes, and it’s because he does all the intangible things and he was a big key to the winning streak. He entered the boxscore tonight. He came out aggressive and took our first four shots — a couple of them designed plays but a couple where he was trying to enter the boxscore.”

Musselman also gave Wade much of the credit for holding Missouri’s star Kobe Brown to just six points on 3-of-10 shooting.

Arkansas: The Razorbacks had lost three straight games before crushing Missouri 87-43 on Jan. 12. Since then, they’ve won 10 of 11 games — including an upset of then-No. 1 Auburn — to return to the Top 25. Arkansas now has a nice opportunity to rise in the rankings and improve its NCAA Tournament seeding with two of its next three games at home against ranked opponents Tennessee and Kentucky.

Missouri: The Tigers lack a true point guard, and it continues to be a glaring weakness for a team that ranks next-to-last in the SEC and 293rd in the nation in assist-to-turnover ratio (.84). Arkansas was the latest opponent to disrupt Missouri’s offense by pressuring its shaky ballhandlers. The Tigers committed eight turnovers in the first half, including three on the first four possessions, to help the Razorbacks build a big lead.

Missouri: The Tigers face Mississippi State on the road Friday and again at home Sunday in a game that was originally scheduled for Jan. 5 but postponed when Missouri had COVID-19 issues.