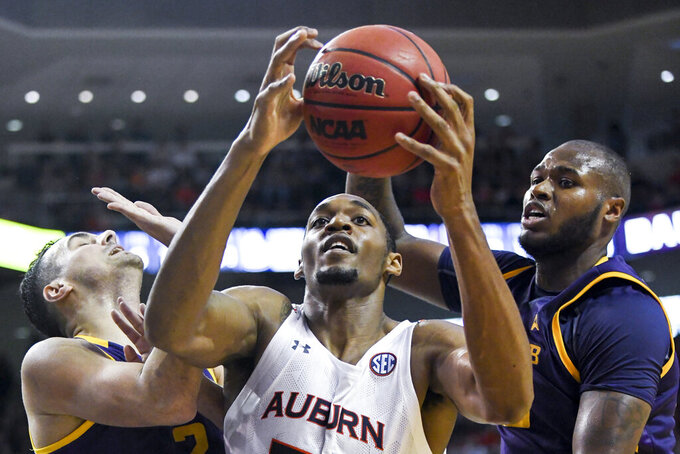 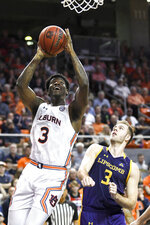 Here are a few things to watch in Southeastern Conference basketball as league competition opens this week:

No. 8 Auburn (12-0) at Mississippi State (9-3): The SEC’s lone unbeaten team opens conference play by going on the road to face a Mississippi State team that could use a quality win to upgrade its resume after absorbing nonconference losses to No. 10 Villanova, Louisiana Tech and New Mexico State. Auburn has played only one true road game so far this season — a 70-69 victory at South Alabama — though the Tigers also are 4-0 in neutral-site contests. This game could come down to which team controls the boards. Mississippi State ranks first and Auburn ranks second in the SEC in rebound margin. The league’s top two rebounders are Mississippi State's Reggie Perry (9.8) and Auburn’s Austin Wiley (9.5).

Can LSU and Tennessee bounce back?: LSU is the defending SEC regular-season champion and Tennessee owned the nation’s No. 1 ranking for nearly a month last season, but both teams are struggling a bit as they prepare to meet Saturday in Knoxville. Tennessee (8-4) has dropped three of its last four games and lost senior guard Lamonte’ Turner to a season-ending shoulder injury. LSU (8-4) had lost two straight games to East Tennessee State and Southern California before ending the skid Sunday by handing Liberty its first defeat. Tennessee coach Rick Barnes said after a 68-48 home loss to Wisconsin that the Volunteers need better backcourt play.

Auburn is one of only two unbeaten Division I teams along with No. 13 San Diego State (14-0). ... SEC teams have gone 8-3 in head-to-head matchups with the Atlantic Coast Conference but have a combined 9-16 record against the Big East, Big Ten, Big 12 and Pac-12. ... Kentucky’s Ashton Hagans has recorded at least six assists in nine straight games. He has an SEC-leading 7.3 assists per game. ... After winning 31 straight home games, Tennessee has dropped two of its last three at Thompson-Boling Arena. ... The SEC’s only Top 25 teams are Auburn and No. 17 Kentucky. ... The SEC had five teams in the top 50 of the NET rankings as of Thursday: Auburn (7th), Arkansas (23rd), LSU (36th), Kentucky (40th) and Mississippi (50th).

Georgia’s Anthony Edwards was rated as the nation’s No. 2 prospect in his class, according to composite rankings of recruiting sites, and the 6-foot-5 guard has lived up to that considerable billing thus far. Edwards ranks second in the SEC in scoring (19.7), behind only Vanderbilt’s Aaron Nesmith (23.5). Edwards showed his ability to deliver in big games by scoring 37 points in a loss to No. 14 Michigan State. Edwards gets another chance to showcase his talents Saturday at No. 9 Memphis, when he matches up with the Tigers’ talent-laden freshman class.

The SEC enters conference play with six teams in the Top 25: No. 4 South Carolina, No. 11 Texas A&M, No. 13 Kentucky, No. 15 Mississippi State, No. 20 Arkansas and No. 22 Tennessee. ... Heading into Thursday’s games, Texas A&M’s Chennedy Carter ranked fifth among Division I players in scoring (22.8) and Auburn’s Unique Thompson was fifth in rebounding (12.2).