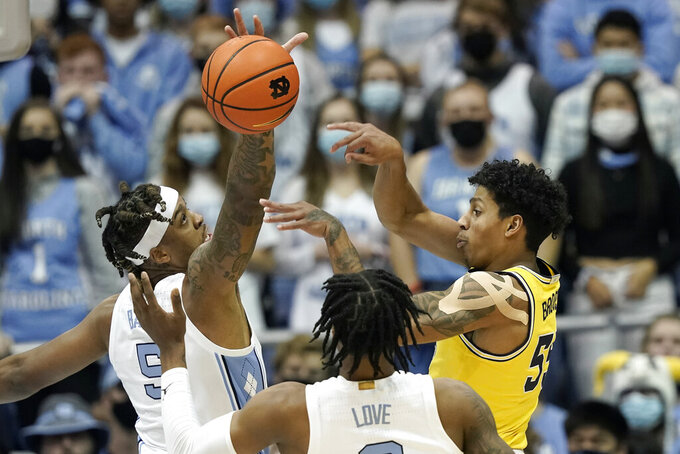 CHAPEL HILL, N.C. (AP) — Caleb Love and Armando Bacot believed North Carolina could play better than it showed in back-to-back losses to ranked teams. The Tar Heels proved it against No. 24 Michigan.

Love scored 22 points to help UNC take control after halftime, and the Tar Heels handled the Wolverines 72-51 on Wednesday night in the ACC/Big Ten Challenge.

North Carolina led 29-27 at the half but shot 58% after the break to turn the game into a surprising rout. It was a sign of growth after November losses to now-No. 2 Purdue and against No. 13 Tennessee a day later in the Hall of Fame Tip-Off in Uncasville, Connecticut. First-year coach Hubert Davis said his team's energy and effort were disappointing in the 17-point loss to the Volunteers.

“We just had to do some soul-searching and we just had to figure out: Do we really want to be a great team or a good team?” Bacot said. “I feel like we took a step in the right direction. I mean, we were all were just pretty upset and (ticked) off about it. And just some of the things that were just said about us as a team, we didn’t like it at all."

The response? The Tar Heels (5-2) were active defensively and did a better job of establishing their paint presence to get better looks as Dawson Garcia (14 points, two 3-pointers) and Bacot (11 points, 14 rebounds) thrived.

“I felt like our guys wanted another opportunity against a big-time team,” Davis said.

Bacot played aggressively out of the break and was fouled twice in a span of 12 seconds by Michigan’s top big man, Hunter Dickinson, early in the second half. That sent Dickinson to the bench for the next 10-plus minutes with four fouls.

The Tar Heels pounced to take advantage, while the Wolverines (4-3) got nothing going in response and trailed by as many as 25 points.

“I saw that we missed one of our best players during that run,” Michigan coach Juwan Howard said. “From there, North Carolina really took advantage. They scored inside in the paint pretty easy, with less resistance.”

Freshman Moussa Diabite scored 13 points to lead Michigan but missed his last four shots after a 5-for-5 start, while Eli Brooks added 11 points. The 7-foot-1 Dickinson, who entered as the team's No. 2 scorer (14.8 points) and top rebounder (8.2), finished with four points and five rebounds in 18 minutes.

Michigan: The Wolverines had a preseason No. 6 ranking in the AP Top 25 and spent a week at No. 4 before a two-point home loss to Seton Hall and an 18-point loss to Arizona in Las Vegas. This was another ugly one for Howard's team, which struggled for second-half stops and never found a consistent rhythm even before the Tar Heels made their move.

“It's hard to get stops when you're giving up good looks,” Brooks said.

UNC: The Tar Heels opened at No. 19 for their first season under Davis, but fell out after of the poll after losses to ranked opponents. They could be set to hop right back into the Top 25 after Davis' first win against a ranked opponent.

This was the fewest points allowed by UNC in an ACC/Big Ten Challenge game, with the previous low mark being 55 at Ohio State in the 2007-08 season. It was the Tar Heels' largest margin of victory in the Challenge since the eventual national champions beat Michigan State by 35 points in Detroit in December 2008.

This also marked the third time in five seasons that Michigan and UNC met in the Challenge, with the Tar Heels winning at home in 2017 and the Wolverines at home in 2018.

The UNC crowd honored ESPN announcer Dick Vitale with a standing ovation before the game. Vitale recently returned to work as he receives treatment for lymphoma.

The Tar Heels also honored Antawn Jamison at halftime after the former national player of the year — whose No. 33 jersey is one of eight retired by the program — was recently inducted into the National College Basketball Hall of Fame.

This story has been corrected to show the Georgia Tech game is Sunday, not Saturday.