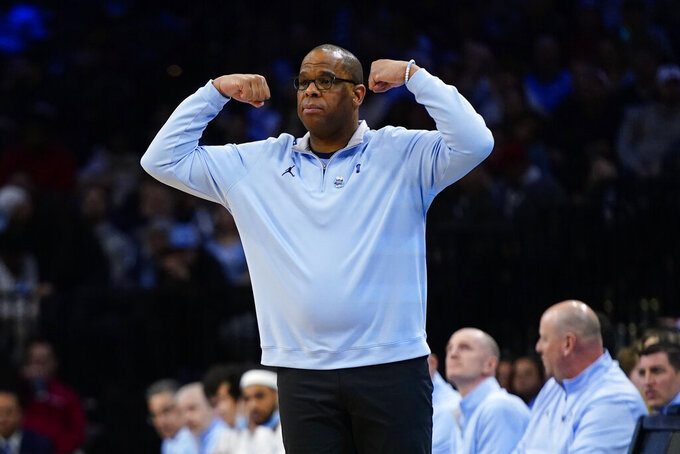 North Carolina head coach Hubert Davis reacts during the first half of a college basketball game against St. Peter's in the Elite 8 round of the NCAA tournament, Sunday, March 27, 2022, in Philadelphia. (AP Photo/Chris Szagola)

NEW ORLEANS (AP) — North Carolina's Hubert Davis doesn't have the long history of sideline success as the rest of the coaches at this week's Final Four.

He's not worried about being the new coach on the block, either.

That's because the former UNC player has something Hall of Famers Mike Krzyzewski at Duke, Bill Self at Kansas and Jay Wright at Villanova don't have: the experience of playing in a Final Four.

That's one of several experiences he draws from as a first-year coach that he said has enabled him to lead the Tar Heels into college basketball's biggest stage. That history includes lessons from from Hall of Fame mentors in the late Dean Smith and Roy Williams in addition to a 12-year NBA career.

“His experience (means) a lot, because when we get rattled, he just reminds us he's been in that position before,” senior forward Leaky Black said Thursday. “He just gets us under control.”

When Davis' team meets longtime rival Duke in Saturday's first-ever NCAA Tournament matchup between the schools, he will become only the seventh men's coach to have played and coached in a Final Four. That list includes Smith and former Indiana coach Bob Knight, with former Florida coach Billy Donovan (2000, 2006, 2007) as the most recent to do so.

Davis played for Smith from 1988-92, and scored 25 points as a junior in North Carolina's Final Four loss to Kansas. Before this year, that was the closest UNC and Duke had ever come to meeting in the NCAAs, with the Blue Devils beating the Jayhawks in the national championship game two days later.

That experience helps Davis connect with his players as someone who brings a rare perspective to the sideline in being able to relate to the demands of playing at one of the sport's blueblood programs. Yet Davis has been eager to deflect questions about outside storylines, such as the significance of the rivalry meeting and the possibility of ending Krzyzewski's season-long retirement tour with a loss.

That is one reason Davis doesn't pay attention to the disparity in experience between himself and Krzyzewski, Self and Wright. Each member of the trio has won at least one national championship, reached at least four Final Fours, and they’ve combined for 2,605 career victories.

By comparison, Davis is a 51-year-old first-timer only a decade removed from a TV broadcasting career. Before this year, his only head-coaching experience was seven years leading UNC’s junior varsity program during his nine seasons on Williams' staff.

It hasn't been a smooth ride. North Carolina repeatedly lost measuring-stick matchups in blowouts and looked uncertain to even make the NCAA Tournament at the beginning of the calendar year.

But Davis has been able to push all the right buttons, transforming the Tar Heels (28-9) into a team that has won 16 of its last 19 games since mid-January. The stretch includes wins against Duke in Krzyzewski's final home game, an overtime win against reigning national champion Baylor in the NCAA second round and a Sweet 16 takedown of a UCLA team that returned largely intact from a Final Four run.

“What Hubert's done with his first year, to get his team to do that is magnificent,” Krzyzewski said.

Davis has done it while navigating a changing college basketball landscape with wide-open player movement through the transfer portal.

“This has been a lot of newness,” Davis said. "It’s a new head coach, new coaching staff, three transfers, two freshmen, tweaks, pivots, alters in terms of how we play on both ends of the floor.

“It takes time. ... I think those shared experiences have put us in a place where we understand what we need to do in order to be successful, and there’s a trust and a confidence in each one of us that allows us to be as connected as we are right now.”

Along the way, Davis has remained confident, assured and unshakably positive with his players. He is open with his emotions, memorably fighting back tears to start a postgame TV interview after securing a Final Four berth while his players celebrated behind him.

He's also never wavered in his belief that this team could come together to do something special, notably by borrowing from Smith's tactics by having pictures of the massive Superdome — home to this week's Final Four — placed in the players' lockers before the season.

It turns out Davis was right to dream big.

“They’ve given themselves, this team, this program, this university, this community everything that they’ve had, and they’ve trusted me,” Davis said earlier this week. “It’s been my first year as a head coach, and they trusted me. And so, my goodness, I love these kids.”