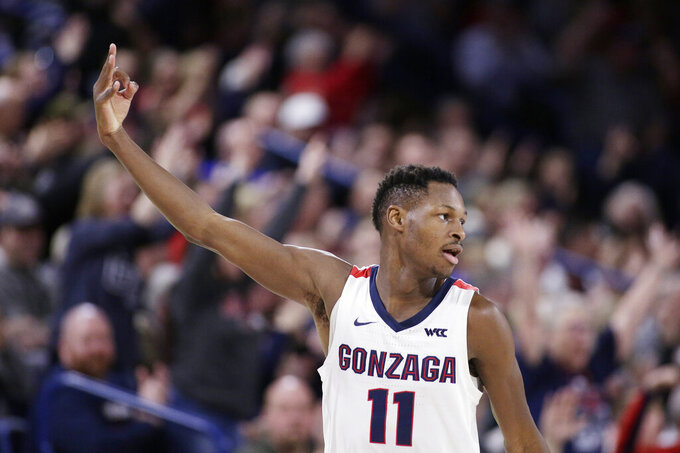 San Diego State survived a big test by beating a talented Utah State team on the road. Auburn kicked off the SEC season by winning at Mississippi State for the third time in its last 18 tries.

As the calendar flipped to a new year, the Aztecs and Tigers are the only undefeated Division I teams left.

Both moved up in The Associated Press poll released Monday.

The top three spots remained unchanged. No. 1 Gonzaga received 54 first-place votes from a 65-member media panel, with No. 2 Duke getting nine and No. 3 Kansas two. Baylor was No. 4.

The Tigers have a new cast of characters this season after a surprising Final Four run a year ago. Even without Bryce Brown, Jared Harper and Chuma Okeke, Auburn has continued to find ways to win.

The Tigers blew through their nonconference schedule before opening SEC play at Humphrey Coliseum, where they've struggled since 2001. Auburn pulled away in the second half of the 80-68 victory and was led by J'Von McCormick, a bit player on last year's team who scored 28 points.

“I think we're a good team. I don't think we're a very good team yet and it's not criticism,” Auburn coach Bruce Pearl said last week. “It's just that I know how much we've got to do offensively, defensively to get there. We're improving. We've got a long way to go.”

San Diego State is off to its best start since the Kawhi Leonard-led team in 2010-11 won its first 20 games. The Aztecs have been stingy defensively in their third season under Brian Dutcher, allowing teams to score 70 points just twice this season.

San Diego State went to Logan, Utah, on Saturday and ended Utah State's 15-game home winning streak with a 77-68 victory. The Aztecs are No. 1 in the NCAA's NET rankings based on the nation's best adjusted efficiency margin and a top-50 strength of schedule.

Gonzaga became the first team to remain atop the poll for three straight weeks in a season of parity.

The Bulldogs didn't make it easy on themselves, having to rally in the second half to beat Portland and Pepperdine last week.

Even so, Gonzaga leads the nation with 88.3 points per game, is winning at a clip of nearly 20 points per game and has six players averaging double figures.

Duke remained at No. 2 after rolling over Boston College and Miami last week. Kansas held at No. 3 following a hard-fought 60-53 win over then-No. 16 West Virginia.

BULLDOGS ON THE RISE

Butler has bounced back from a disappointing 2018-19 season by grinding opponents down defensively.

The Bulldogs (14-1) are fourth in Ken Pomeroy's adjusted defensive efficiency and are fourth in Division I scoring defense, allowing 54.1 points per game.

Butler moved up five spots in this week's poll to No. 11, the program's highest ranking ever, after shutting down high-scoring Creighton.

No. 10 Florida State had the week's biggest jump, moving up eight spots after knocking off No. 13 Louisville and Georgia Tech last week.

No. 8 Michigan State moved up six spots after crushing rival Michigan 87-69. San Diego State also was up six spots and Butler was next, improving five places.

Memphis had the week's biggest drop, falling 12 places to No. 21 after a three-point loss to Georgia.

No. 19 Michigan dropped seven spots after the loss to Michigan State.

No. 11 Ohio State, which was once up to No. 2, tumbled six spots after consecutive losses to West Virginia and Wisconsin.

No. 9 Oregon dropped five places after losing to Colorado and beating Utah.

Colorado was the lone team to move into the poll this week. The Buffaloes, who were up to No. 20 earlier this season, were back in the poll at No. 24 after beating Oregon and losing to Oregon State.