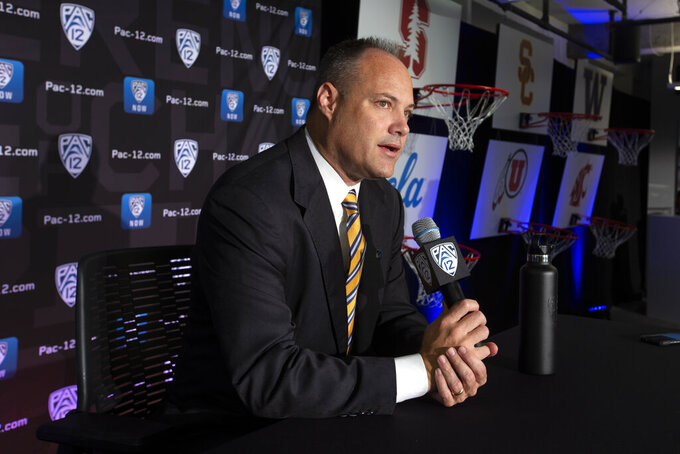 "That's our motto as a team," senior point guard Paris Austin said. "So every day we're putting in that extra work before practice and after practice, and just being ready to go."

Cal can't fall much further as the Golden Bears try to bounce back from the worst two-year stretch in school history: Back-to-back eight-win seasons and a 16-47 record.

Fox had a 286-176 record in 14 seasons as coach at Nevada and Georgia. He made the NCAA Tournament five times but never advanced to the Sweet 16. Fox was fired at Georgia last year after failing to reach the tournament in each of his final three seasons with the Bulldogs.

He hired longtime college head coach Trent Johnson as a special assistant on his staff to lead player development efforts and considers him a valuable addition with his knowledge of the Pac-12.

Even Fox realizes it's fair Cal was picked at the bottom.

"We've been trying to change it from day one, and hopefully we can prove everybody wrong," he said.

Everything is new for his players, and Fox knows this transition will take time as Cal tries to return to respectability.

"Right now it's about making a daily investment to get better, and to this point, which is still very, very early in the season and obviously in my tenure, I've been pleased with the investment that these kids are making," Fox said.

Fox refers to a monthly roadmap to chart his group's progress then take the next step forward.

His approach has resonated with players.

"I haven't really met a man like him to be honest, especially from a coaching standpoint," sophomore guard Matt Bradley said. "His No. 1 thing is the team . he puts the team in front of everything, and he expects the same from us. He's a players' coach, a really good guy."

The Bears have been picked to finish last in the conference by media who cover the league.

They hope to prove some people wrong and pull off surprising results along the way despite the challenges of recent years.

"I think our motivation comes from within each individual. Being underdogs, we all have something we want to prove, we all want to show that we've been working hard just like other teams," Austin said. "We want to show that it's going to pay off."

Austin is the Bears' top returning scorer having averaged 11.6 points while also dishing out 4.3 assists.

He knows he is the veteran on the team, feeling a little like the old guy.

"I'm looking forward to being a better leader on the floor, making better decisions," Austin said.

Bradley has trimmed 10 pounds from his 6-foot-4 frame and he is counting on his improved fitness contributing to stronger defense and more production on the offensive end.

Now in his second year, the adjustments should be fewer. Bradley wants to step in and take a charge when needed, make the hustle play, even speak up if his teammates need him to be vocal.

"As a freshman, I was just learning," he said. "And I'm not saying I have all the answers now, but I definitely know a lot more. I'm really excited for this upcoming season because a lot of the stuff I do now is going to be based on experience."

Getting back to basics — a focus on fundamentals — will be important for the Bears.

For Fox, that means 17 new players learning a system.

"What we tried to do was spend the summer workouts installing our defense and getting that terminology as in place as we could, so when official practice started we were only working on the other half of the terminology and on our offense, and so that has made it a little bit smoother," Fox said. "But when you have 17 new players — and new coaches — we've got to be very detailed in our plans, so everyone can be on the same page."