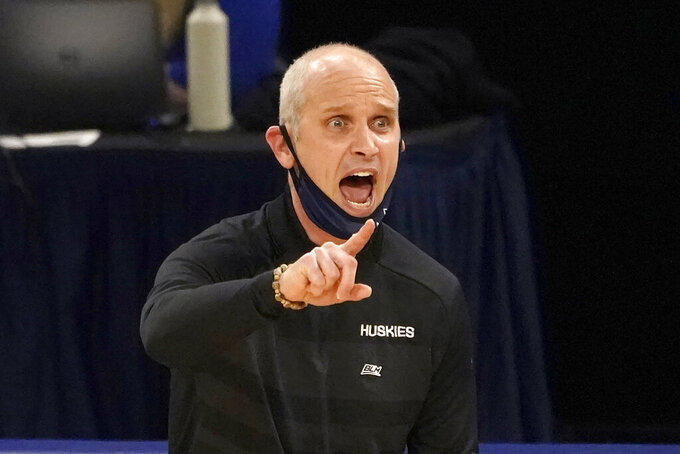 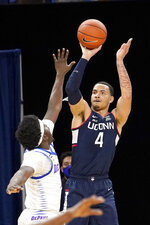 STORRS, Conn. (AP) — UConn fan Bryan Jackson says he thought his taste buds were safe when he joked last week on Twitter that he'd drink a spoonful of hot sauce if his Huskies came from behind to beat Marquette.

After all, it was already the second half, UConn was down by 18 points and its best player, James Bouknight, had gone down with an injury.

“I saw that people were very down on Twitter and I just wanted to add some levity to the situation,” he said. “I thought people might get a chuckle out of it. And the other aspect of it, it was kind of an offering to the basketball gods.”

And so, in what has since become a viral video, Jackson, a 2006 UConn graduate who lives in Boston, posted a tweet of himself downing a large spoonful of Black Bison hot sauce, then taking another swig from the bottle, while chanting, "U-C-O-N-N, UConn, UConn, UConn."

Another fan tweeted that he believed all UConn fans should follow suit, in penance for doubting their Huskies.

Numerous fans began posting videos of themselves taking shots of hot sauce. They did it again when UConn (7-1, 4-1 Big East) went to Butler and won on Saturday, and more fans joined in after a close win on Monday at DePaul.

That's when the Husky Ticket Project stepped in. The charity, formed by three alums three years ago, raises money to send underprivileged kids to UConn football and basketball games. They organization asked everyone for a donation of at least $5 to go along with their hot-sauce shots.

“It sparked an idea in my head that we should make this like the ALS ice bucket challenge,” said Kevin Solomon, one of the charity's founders.

Jackson volunteered to take swigs of hotter and hotter sauces as fundraising goals are met. Others joined the cause. One hot sauce brand got wind of the challenge and is offering discounts to participants who buy their sauce.

“It just caught on. I can’t tell you how surprised and grateful we are,” Solomon said. "UConn fans are the craziest, most passionate fans, and now we’ve found out they are also the most generous.”

On Wednesday, less than two days into the challenge, the Husky Project already had been tagged in numerous videos and collected more than $10,000.

“It's already become a thing,” said Chris Licata, a 37-year-old graduate who is on the hook to down a cocktail of several sauces just before the tip of UConn's next game, which is scheduled for Monday against St. John's. “I never really expected to take a shot, but I told them if they reached $3,000 I’d do it. They blew right past that."

Dan Toscano, the chairman of the school's Board of Trustees, said he's decided to donate his seats for an upcoming game to a random fan who participates in the challenge. He said he's hoping to get on the court with coach Dan Hurley after a win and drink some sauce.

Toscano acknowledges he's not thrilled by the taste test part of the deal. But said it signifies something bigger — the revival of UConn basketball after NCAA issues and conference realignment that left the school in the American Athletic Conference for seven years before this season's return to the Big East.

“People lost their mojo and I think this shows it is coming back,” he said.

The school broke into the rankings at No. 25 this week for the first time since 2016, though Bouknight is out indefinitely after undergoing surgery on his left elbow.

Organizers of the challenge reached out to Hurley and women's coach Geno Auriemma, in hopes they might get involved, either by supporting the challenge or actually drinking some hot sauce.

Hurley said Wednesday that he's on board.

“I think it’s great how much the fans are involved in our season, even though they can’t be at the games," he said. "And I want to get involved in what is a really good cause and helps kids get to our games. I’m not a big spice person, but I’m ready to suck it up one time.”

Jackson is now committed to downing sauces at the top to the Scoville spice scale, with names such as Dave's Ghost Pepper Garlic Insanity Sauce, the Torchbearer Garlic Reaper and The Last Dab. Should UConn go on to win a conference title or a fifth national championship, he's worried he may need a fundraiser of his own to help pay for reviving his mouth.

“I mean, I'd have to celebrate with some hot sauce," he said. “I just don't know that I can go any hotter than what I've already committed to.”