An updated look at the NCAA Tournament bubble 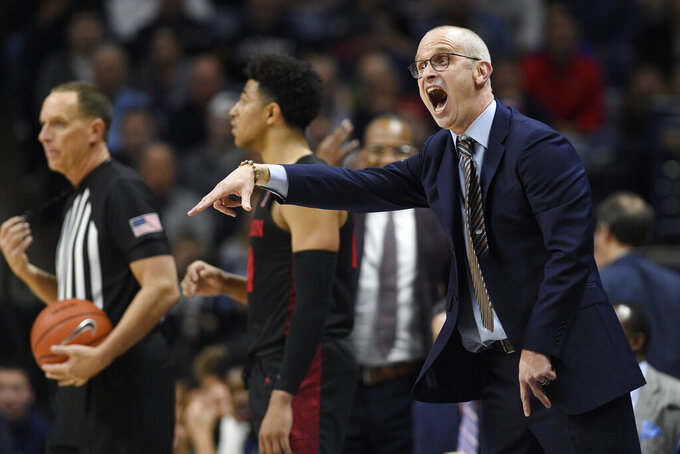 As conference tournaments continue largely without fans ahead of Selection Sunday, here is a look at teams teetering on the NCAA Tournament bubble through games played Wednesday night:

The Huskies (19-12) head into their American Athletic Conference opener against Tulane on Thursday having won five straight games and with arguably as much momentum as anybody in the league. Dan Hurley has done a masterful job of making sure they're peaking at the right time.

The Billikens (23-8) earned a bye into the Atlantic-10 quarterfinals, which is both a blessing and a curse: They avoid the chance of a bad loss Thursday, but also lose the chance to pick up another win. Instead, they will have to await the George Mason-St. Bonaventure winner — and the Bonnies are a bubble team in their own right.

The Cowboys (18-14) were nowhere near the bubble three weeks ago, but they finished the regular season with three straight wins and then got a go-ahead bucket from Isaac Likekele with 3.8 seconds left to beat Iowa State in the first round of the Big 12 Tournament. A win over No. 1 Kansas on Thursday would almost certainly punch their ticket.

The Wolfpack (20-12) have wins over Wisconsin, Virginia and Syracuse on a fairly solid resume. But it may be their win over Pittsburgh in the ACC Tournament on Wednesday that pushes them into the dance.

On the one hand, the Gators (19-12) went 11-7 and finished fourth in the Southeastern Conference. On the other hand, they lost three of their last five games down the stretch. They get Georgia in the SEC Tournament on Thursday.

Mick Cronin has done a masterful job with the Bruins, who wound up going 12-6 in the Pac-12 and swept Arizona and Colorado along the way. But with a non-conference strength of schedule nearing 200 nationally, the Bruins could probably use at least a win in the league tournament to feel good.

Another school from the SEC with work to do, the Vols (17-14) had one of the toughest schedules in the nation and absorbed plenty of lumps along the way. But wins over Kentucky and Alabama were offset by losses to Georgia and Texas A&M, and that means a win over Alabama on Thursday could be crucial.

The Panthers (25-6) have been on an extended break since losing to Drake in stunning fashion early in the Missouri Valley Tournament. Will anybody remember wins over Colorado and South Carolina early in the season?