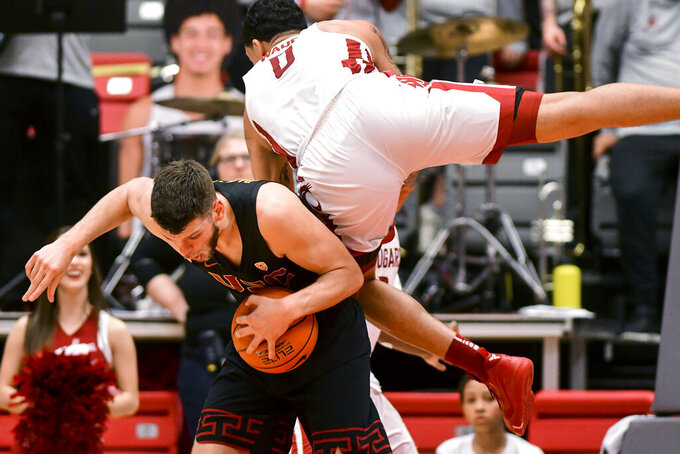 PULLMAN, Wash. (AP) — The Trojans were able to bounce back after a disappointing loss to Washington earlier in the week by splitting their two-game road trip.

Nick Rakocevic scored 25 points and grabbed 13 rebounds for his 11th double-double of the year and USC never trailed en route to a 93-84 win over Washington State on Saturday night.

"We turned the ball over too many times and we had some offensive rebounding breakdowns when we gave too many second chance points up to Washington," USC coach Andy Enfield said. "That was our two big emphasis in today's game."

USC exploded to start the game with a 16-4 run in the first seven minutes. Shaqquan Aaron knocked down a 3-pointer, followed by a jumper from Thornton and a big dunk underneath the basket by Victor Uyaelunmo.

"I thought our guys played with a lot of energy to start the game, which we have been. We have won four out of the last five and in the four games we won, we had a lot of energy," Enfield said.

WSU fought back with an 8-0 run of their own to make it a seven-point game after 3's from Kunc and Viont'e Daniels, followed by a layup from Franks.

"We had just a horrendous start to the game shooting. I didn't feel like we were very talkative on defense either," WSU coach Ernie Kent said. "When you don't have that kind of energy on defense, it will affect your offense a little bit."

USC answered with a 17-2 run over 3:30 to retake a 19-point lead. Rakocevic scored the first six points of the run after a layup and four-point play. Rakocevic was fouled on a layup, missed his free throw and recovered his own rebound for an easy bucket under the rim completing the four-point play.

The run was capped by a jumper from Thornton and a 3-pointer from Boatwright. USC lead at halftime 47-33 shooting 63 percent from the field.

WSU cut the lead to eight points at one point in the second half but USC went on an 11-2 run over 3:30 with a jumper and 3-pointer from Kevin Porter Jr. during the run. The Trojan run gave them a 16-point lead with 10 minutes left in the game.

The Cougars got within single digits after a 3-pointer from Franks cut the lead to eight with 22 seconds remaining but USC would make their free throws down the stretch to seal the victory.

"Washington State is an extremely dangerous team because they shoot so many 3-point shots. They made 14 tonight, I think they shot 41 total and give them credit," Enfield said. "They battled the entire game and they made it really tough on us to pull away, we are fortunate to get a win here."

CJ Elleby for WSU and Aaron for USC were both hit with technical fouls at the 13:12 mark of the second half when things got chippy under the basket. The bad blood between both teams stems back to last season after Carter Skaggs was hit in the groin by Chimezie Metu, resulting in a one-game suspension for Metu.

USC: The Trojans wrapped up their two-game road trip with a much-needed win against a bad Cougar team. The race is heating up in the Pac-12 Conference where the first four seeds get a first-round bye in the Pac-12 Tournament.

Washington State: The Cougars are on a five-game losing streak after beating California on Jan. 17. With blowout losses in the last four games, WSU is desperate to get back in the win column. WSU looks to finish the season at the bottom of the conference standings.

USC: The Trojans will host Utah on Wednesday.

Washington State: The Cougars will travel to play Arizona State on Thursday.