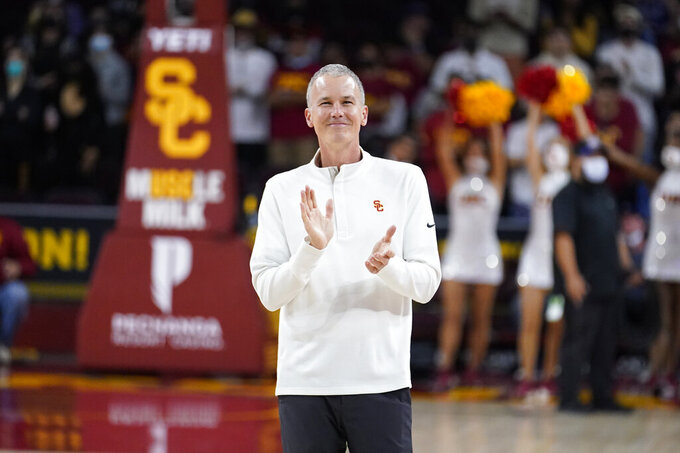 Athletic director Mike Bohn announced the extension through the 2027-28 season on Wednesday, a day before the 21st-ranked Trojans open play in the Pac-12 Tournament. The team is 25-6 overall, having set a record for regular-season victories.

“My family and I are very happy to be part of the Trojan Family,” Enfield said in a statement. "I feel great about the future of USC basketball in the Pac-12 and nationally.”

In his ninth season, Enfield's overall record is 182-116. He was named Pac-12 coach of the year last season, when USC was 25-8 and advanced to the Elite Eight for just the second time in 67 years.

Enfield's recent five-game winning streak over crosstown rival UCLA was USC’s longest versus the Bruins since 1943.

“Andy has continued to meet and exceed every expectation we have set for him,” said Bohn, who has been Enfield's boss for three years. "We are excited about the trajectory of our men’s basketball program with regards to results, recruiting, and the development of the young men on our team. We are committed to continuing to enhance and strengthen our program as we move ahead, and we are looking forward to the immediate opportunity to make another March Madness run.”

USC has had players selected in the first round of the NBA draft the last three years, including Evan Mobley last year.