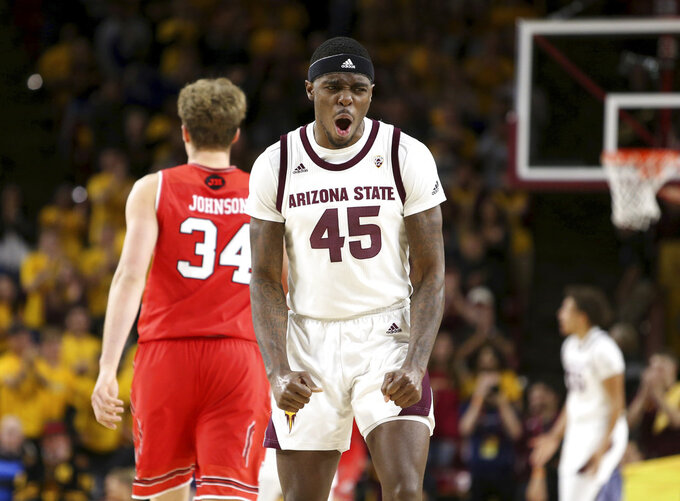 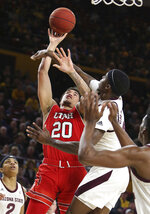 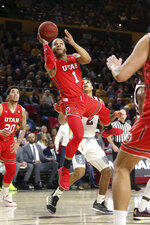 TEMPE, Ariz. (AP) — Utah got its Pac-12 season off to a stumbling start, struggling against Arizona State's defensive pressure while watching the Sun Devils take off in transition.

Down 17, the Utes found their way at both ends of the court, turning what appeared to be headed toward an ugly loss into an uplifting win.

"It was a lot of resilience, obviously," Utes coach Larry Krystkowiak said. "We didn't start the well and then I thought we settled in. Guys saw the ball go in and we chipped away at it."

Arizona State (9-4, 0-1) seemed to shake off a disappointing home loss to Princeton, jumping on the Utes early while building the big lead. The Sun Devils fell back into the same habits that cost them against the Tigers, watching a four-point halftime lead turn into a double-digit deficit.

Arizona State hurt itself at the free-throw line, going 12 for 25, and had numerous defensive breakdowns, leaving the Utes open at the 3-point arc far too often.

"It's frustrating because it was a game we had control of," Arizona State coach Bobby Hurley said. "We let them cut it to four at halftime and it snowballed from there."

The Sun Devils picked up one of the biggest wins in program history by knocking off top-ranked Kansas three days before Christmas, only to fall flat in a home loss to Princeton to close out their nonconference schedule.

Utah closed out its nonconference schedule with an 86-71 loss to No. 6 Nevada last Saturday. The Utes had 18 turnovers and no answer when the Wolf Pack made a big second-half run.

Led by a confident Martin, the Sun Devils had much better ball movement than they did against Princeton, working it around for open shots while racing out to a 28-11 lead.

Arizona State also made every Utah possession a struggle, forcing the Utes to take numerous shots late in the shot clock.

"We had a heck of a time with their pressure, getting into our offense," Krystkowiak said. "We didn't get many shots up, they had eight points in transition in no time, which was a key all week."

The Utes found an offensive flow late in the half while the Sun Devils started taking questionable shots, whittling Arizona State's lead down to 43-39 at halftime.

Utah kept rolling to open the second half, hitting 5 of 7 from 3-point range and using an 11-0 run to go up 61-49. The Utes outscored Arizona State 50-21 during a 16-minute stretch spanning halftime.

The Sun Devils pulled within 72-68, but kept missing free throws and the Utes kept hitting 3s.

"When you have a team down, you have to give them no hope and we let them back in it," Hurley said.

Utah: Had an up-and-down nonconference season, but got the Pac-12 off to a great start with its big rally.

Arizona State: Once considered the class of the Pac-12, ASU is struggling at both ends of the floor. The Sun Devils have lost three of four and will be hugely disappointed after blowing a 17-point lead.

The senior forward learned after the Sun Devils' home loss on Saturday that his brother, Wanyaa Stewart, had been shot and rushed to the hospital. Stewart, 22, did not survive, but Cheatham was at practice the next day to take his mind away from the loss.

Utah had a 38-24 advantage in bench points against a deep Arizona State team. Tillman was the big key off the bench, hitting 6 of 11 shots while finishing with six rebounds and five assists.

Utah: Plays at Arizona on Saturday.