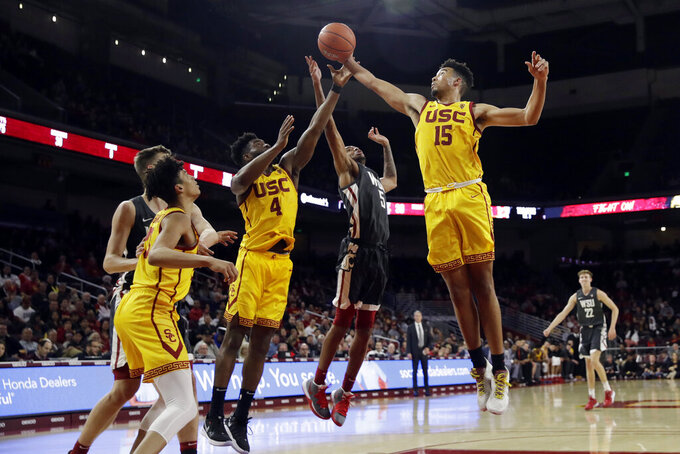 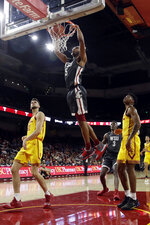 LOS ANGELES (AP) — The turning point for Southern California on Saturday was quick and decisive, lasting about 30 seconds and impactful enough to make a difference for the rest of the evening.

When Washington State jumped out to an 8-0 lead 1:27 into the game, aided by a pair of 3-pointers, Enfield gathered his team for a little chat.

“He was a little animated,” USC’s Isaiah Mobley said. “Honestly, he told us right before we went out (for the game), ‘I don’t want them to have a 10-point lead right away and have to call time out.’ Luckily it was eight.”

Mobley could joke about it afterward. Enfield wasn’t smiling in the team huddle during his early timeout.

“They weren’t going to beat us inside and the only way they could beat us was from the 3-point line. Here we give up two 3s to (CJ) Elleby and (Jervae) Robinson and all they do is shoot 3s. So that was the message: ‘If you want to win this game you have to get a little more intense than what you’re playing right now.’”

After going 2 of 2 from distance to open the game, the Cougars went 2 of 26 from the 3-point line the rest of the way. The Cougars missed 21 consecutive 3-pointers until Tony Miller made one with 39 seconds remaining.

“They’re long (on defense) and they did a good job,” Washington State coach Kyle Smith said. “It bothered us and it felt that way. But I felt that we took some quick (shots). We made some early but we have to take some better ones.”

Ethan Anderson scored 12 points while Mobley had nine points and 11 rebounds as the Trojans (19-7, 8-5 Pac-12) earned a home sweep of the Washington schools after a victory over Washington on Thursday.

Elleby scored 22 points with 13 rebounds for the Cougars (14-12, 5-8), who lost for the third time in their past four games while losing both games in the Los Angeles area after they fell to UCLA in overtime on Thursday. It was Elleby’s 10th career double-double.

“He has a big heart and he wants to do well out there,” Smith said of Elleby. “He was pressing a little bit but he gave us a chance. I think we got it to 10 and had a couple looks with a 3-pointer (that missed).”

Utomi reached the 20-point mark for the second time this season, with both coming in the past four games. It was the lowest scoring game for a USC opponent in Pac-12 play this season.

USC was playing without leading scorer and rebounder Onyeka Okongwu, who has missed the past two games because of a concussion that reportedly occurred last Saturday at Arizona State.

The Trojans were working their way through injuries on the court as well as Anderson returned after a knee contusion in Thursday’s game and Mobley stayed in the game after tweaking his right ankle just past the midway point of the first half.

Washington State was without point guard Isaac Bonton after the junior exited the game against UCLA with what appeared to be a leg injury.

The Trojans rallied from their early 8-0 deficit to lead 30-21 lead at halftime by holding Washington State to 27% shooting from the field.

Utomi passed his previous season high of 22 points on a 3-pointer with 4:18 remaining, holding his follow-through high in the air while giving a nod to the Trojans’ bench as he skipped back down the court. The 3-pointer gave USC a commanding 63-39 lead.

“I just shoot the ball and if I shoot the ball well it opens things up for a lot of people,” said Utomi, a graduate transfer who played three seasons at Akron. “I’m just going to continue to do that.”

Washington State: Elleby is now 42 points shy of 1,000 for his career and was on pace to becoming the third fastest to 1,000 before the start of play Saturday. … Washington State not only shot 29% percent from the field Saturday, they shot 28% in the first meeting, a 65-56 defeat to the Trojans at home on Jan. 2.

USC: The Trojans were not only without Okongwu, they also were without guard Kyle Sturdivant for the second consecutive game after the death of his father last week. Sturdivant is also expected to miss the upcoming trip to Colorado and Utah. … Enfield now has 129 victories with the Trojans, three shy of Henry Bibby who is fourth on the school’s all-time list. Sam Berry’s 260 victories are the most in school history.

USC: At Colorado on Thursday.