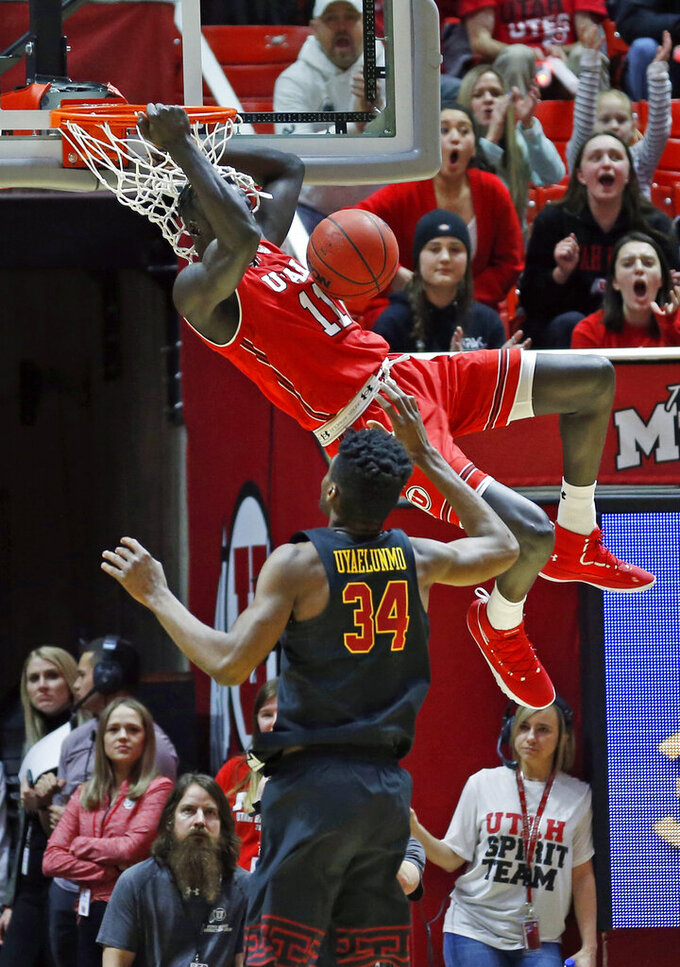 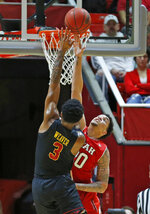 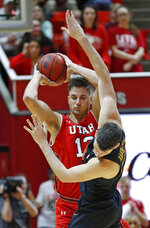 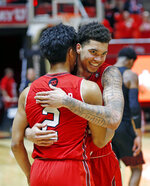 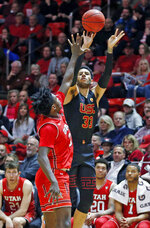 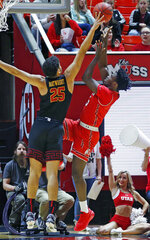 Just one game after going scoreless on five shots, the senior guard made six 3-pointers and scored 20 points to lead Utah to an 83-74 win over Southern California on Thursday night.

"As a shooter, you can't dwell on a miss. You just know the next one has got to go in. I just make up my mind and let it fly," Van Dyke said.

"I'm trying to be aggressive and take it to them. We're better when we're aggressive as a team. When I come out and set that tone, they feed off me," Allen said.

With Allen inside, Van Dyke outside and Barefield slashing, the Utes kept the Trojans on their heels.

Freshman Elijah Weaver scored a career-high 17 points and Bennie Boatright and Nick Rakocevic also had 17 apiece for the Trojans, who have lost their last three and six of eight.

Boatright has made 29 of 53 3-point attempts in his last five games but the Utes usually had a defender draped on him and limited his attempts. The USC game plan was to do the same to Utah's shooters.

"A couple times on ball screens we gave up those 3s and when we would fight through, they would shot fake and Van Dyke stepped through in the first half and hit some really tough shots," USC coach Andy Enfield said.

Van Dyke's 3-pointer gave Utah a 76-61 lead with 3:42 remaining — "I think it's going in every time he shoots it," Barefield said — but the Utes, who have struggled with the press at times this season, had a couple turnovers that allowed the Trojans to draw within single digits. It might have been even tighter but the officials withdrew an offensive foul on Novak Topalovic after video review with 2:09 left.

"We're pretty tough to defend when we play free and get out in transition," said Van Dyke of the 22-6 edge in fast-break points.

Jayce Johnson, Utah's usual starting center, was out with an ankle issue but the Utes dominated in the paint and outrebounded the Trojans 32-23. The Utes tallied 17 second-chance points to just one for USC.

"Not having Jayce tonight, we understood we had to really rebound and the guards were able to grab some boards and push," said Barefield, who had a career-best seven rebounds.

The Utes only trailed in the first minute of the game. That allowed the Utes to avoid overthinking and play against their instincts.

"It was amazing and something we talked about amongst ourselves before the game and just said, 'Let's go hoop with some joy,'" Barefield said. "Our passion showed tonight."

USC's Jonah Mathews was carried off the court after suffering a leg injury near the end of the first half but returned to play in the second half and finished with 10 points.

USC: The Trojans are limping to the finish. They had been betrayed by horrid free-throw shooting in their prior two outings but this one came down to being a step slow to loose balls and rebounds as they shot 55.6 percent from the field and 70 percent from the line. "We only had two offensive rebounds so we had no offensive rebounds from our guards or forwards. We shot a high percentage from the field but there were a couple toughness plays that we missed out on," Enfield said.

Utah: The Utes made a strong play for a top-four finish (and can clinch the third seed by beating UCLA Saturday) and a bye in the Pac-12 tournament with one game left. The Utes looked as fluid on offense as they have for several games and limited their scoring droughts with good shooting. "We had a number of one-pass, no-pass shots to start the game ... but once we got going with the passing, it was contagious," Utah coach Larry Krystkowiak said.

USC: Plays its final regular-season game at Colorado on Saturday.

Utah: Caps the regular season with UCLA at home on Saturday.