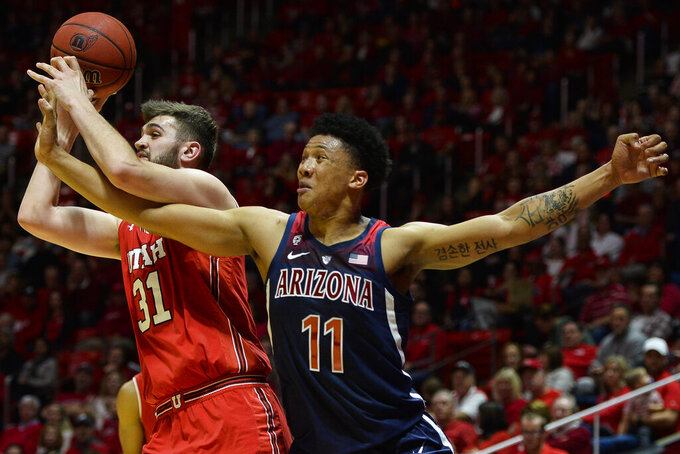 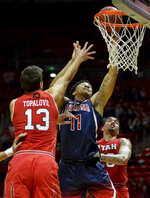 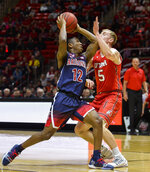 SALT LAKE CITY (AP) — Parker Van Dyke may not start but he picked up right where he left off.

One game after capping a 23-point second-half comeback with a buzzer-beater at UCLA, Van Dyke made seven 3-pointers and scored a career-high 23 points and Jayce Johnson also set a career-best with 17 points to help Utah beat Arizona 83-76 on Thursday night.

"A little magic came home with me from Westwood," Van Dyke said. "It was a really fun game and it was great to get a win against Arizona - that's my first one as a Ute."

Van Dyke is a senior but has become a reserve the last three games. Once he got on the court, he made five 3s in a row to help the Utes keep pace in the first half.

"I thought there was something off with my eyes" as the hoop looked so big, Van Dyke joked. "The shot is feeling good. I have a good rhythm and good confidence and my teammates are doing a great job getting me open and getting me shots."

Sedrick Barefield had 15 points and six assists and Timmy Allen scored 14 for the Utes (14-10 overall, 8-4 Pac-12), who have won three in a row and are in second place in the conference. But the story of this victory was the offense of Van Dyke and Johnson, who both average seven points a game.

The Wildcats got within five points in the final minute but Both Gach made four straight free throws in the final 13 seconds to clinch the win.

Neither team led by more than Arizona's 32-26 margin in the first half until Utah went on a 18-2 run in the second half, sparked by Van Dyke's shooting and Johnson's strong play at the rim.

"Parker was on fire," Barefield said. "And Jayce, I'm not surprised. He's one of our hardest workers ... and he just got it going. He just continues to get better and better."

Johnson's follow basket with 7:03 to play gave Utah a 66-51 lead. Utah's center barely touched the ball on offense in the first half but dominated the paint in the second half, scoring all of his points.

"I was just playing hard and a lot of my points were off offensive rebounds and passes from Sedrick on my rolls," said Johnson, who added 10 rebounds and marked the fifth straight game he has notched double figures on the boards.

Utah didn't score during the first four minutes of the game, until just after Van Dyke checked into the game and hit a shot from the corner.

The Wildcats are 13-2 against Utah since Sean Miller became the head coach at Arizona. The Wildcats outlasted Utah 84-81 in overtime on Jan. 5. Ten of those contests have been decided by single digits.

"They're hitting on all cylinders," Miller said of Utah. "Often times, you judge the November and December by who you beat and what you did. Utah is one of those teams in college basketball that they're better now than they were then."

Arizona: Except for Utah's big run, the Wildcats stymied Utah's offense but looked helpless during the onslaught. Wins that used to come so easy are now difficult as the team has lost confidence, especially on the offensive end. Arizona's goal of getting a first-round bye in the Pac-12 Tournament is fleeting now, especially with surging Colorado looming on Sunday.

Utah: The Utes usually struggle if Barefield isn't playing well but Van Dyke's sharpshooting and Johnson's unexpected big scoring half got Utah back on track at home where they had lost four of their last six games. With more offensive weapons, the Utes are much tougher to stop but it all starts on defense. When they can't guard, their offensive flow falters.

THE SEVEN-FOOTER IS GROWING UP

In addition to the 17-point second-half explosion, Johnson is just a couple of points away from having five straight double-doubles.

"The word 'process' is pasted all over our practice facility," Utah coach Larry Krystkowiak said of Johnson's improvement. "Of all the people I've coached, he's one the guys who most wants to do the right thing and will do whatever we ask. He's a warrior."

Johnson has overcome several leg and foot injuries in his time at Utah but the junior is "reaping some of the benefits of perseverance and he's undoubtedly getting better right before our eyes. Nobody plays harder," Krystkowiak said.

Krystkowiak commiserated with Miller before the game about how lonely it can seem as a coach when things aren't going well on or off the court. With outside investigations looming and Brandon Williams still injured, things may get worse before they get better.

"We don't want to lose our seventh in a row, but is it is a possibility. For us, it is controlling the things that we can control," Miller said.

Players have switched from expecting to win every game to just doing their best.

"We're just focusing on getting better, sticking with each other, and playing hard every time we step out on the court. We want to give it our all," said Alex Barcello, who had 12 points.

Arizona continues its mountain swing at Colorado on Sunday.