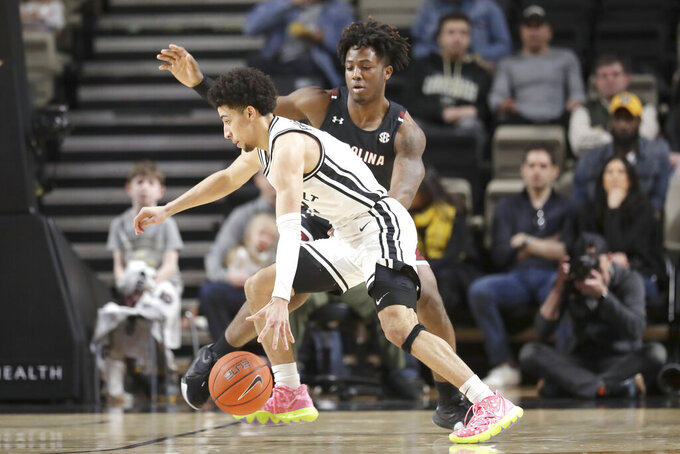 Scotty Pippen Jr. tied a career high with 21 points and Maxwell Evans added 20, leading Vanderbilt to consecutive wins for the first time since December with an 83-74 victory over South Carolina in a regular-season finale on Saturday.

“Let’s go catch white lightning, man,” Stackhouse said of the SEC tournament at nearby Bridgestone Arena in Nashville. “We want to make it where they stop coming to Nashville because we’ve got that type of fan support here.”

Vanderbilt (11-20, 3-15) won back-to-back league games for the first time since February 2018 when it beat Mississippi State and Florida.

“Just being able to attack, getting mismatches, seeing the bigs, knowing that they’re going to jump if I pump-fake and trying to get contact,” Pippen said when asked how he got to the foul line so much. “And just knowing that when we’re in the bonus I know I’ve got to keep attacking.”

Saben Lee added 19 points for the Commodores, who beat Alabama on Tuesday.

Lee erupted for a career-high 38 points in his previous game.

He scored the game’s first basket, but then missed seven straight shots from the floor before heating up in the second half.

South Carolina narrowed the deficit to 72-68 on two foul shots by Trae Hannibal with 2:04 left, but that was as close as it got.

Jermaine Couisnard fouled out with 1:29 left with 13 points for the Gamecocks.

Vanderbilt trailed by two points at halftime before opening the second half with a 15-6 run.

“I mean, basketball is a game of runs and they went on a big run and we couldn’t do the best to stop it,” Gamecocks forward Justin Minaya said.

South Carolina: The Gamecocks led at halftime before fading in the second half.

Vanderbilt: The Commodores finished last in the SEC, but won their last two games in the regular season.

Evans scored 15 of his 20 points in the first half.

“It just felt like I’m the only one in the gym,” Evans said. “It felt like everything I shoot is going to go in, so, hey, I’ll just take advantage of it.”

The loss to the last-place Commodores probably hurt the Gamecocks’ chances of getting into the NCCAA Tournament.

Vanderbilt hosted a donation drive to assist with Middle Tennessee relief efforts at the McGugin Center before the game for victims of Tuesday’s tornadoes, which killed at least 24 people and destroyed dozens of buildings.

The Nashville tornado reached wind speeds of about 160 mph.

There was a moment of silence before the game to honor those affected by the storms.

First responders were asked to stand to be honored during a first-half timeout.

“The tornado happened and I know it’s hard to come out here, and I just want to thank everyone for the support,” Evans said of the vocal crowd.

South Carolina will play its first game at the SEC tournament on Thursday.

Vanderbilt, the 14 seed in the SEC tournament, plays its first game at 8:30 p.m. Wednesday.