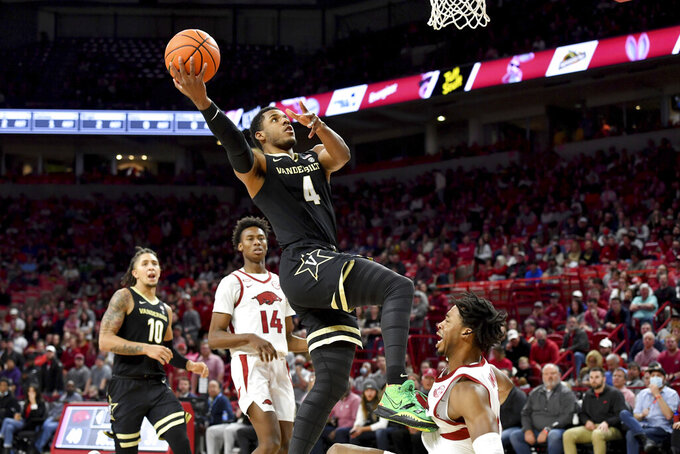 Vanderbilt guard Jordan Wright (4). Is fouled by Arkansas guard Stanley Umude (0) as he drives to the hoop during the second half of an NCAA college basketball game Tuesday, Jan. 4, 2022, in Fayetteville, Ark. (AP Photo/Michael Woods) 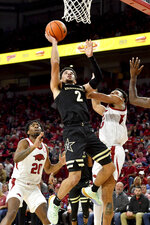 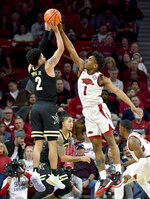 Arkansas' Chris Lykes made 1 of 2 from the foul line with 15 seconds to go to bring Arkansas within 75-74. Lykes stepped to the foul line having made all 31 of his free throws in the last three minutes of games this season. Lykes secured the offensive rebound off his miss and kicked it to Jaxson Robinson, who missed an open 3 with 11 seconds left.

Rodney Chatman made 1 for 2 from the foul line with 26 seconds left which served as Vandy's (9-4, 1-0) final points after Pippen fouled out with 41.5 seconds left.

Arkansas (10-4, 0-2) entered having won seven straight in the series and 11 of 12. It was the first SEC-opening win for third-year coach Jerry Stackhouse.

Notae's layup with 56 seconds left before halftime gave Arkansas its biggest lead of the half at 40-31. Pippen responded with a pair of foul shots after Notae fouled him.

Out of a timeout with a little more than a second left, Pippen scored a layup off a lob at the horn to reduce the deficit to five.

Next up for the Commodores is a home contest against South Carolina on Saturday.