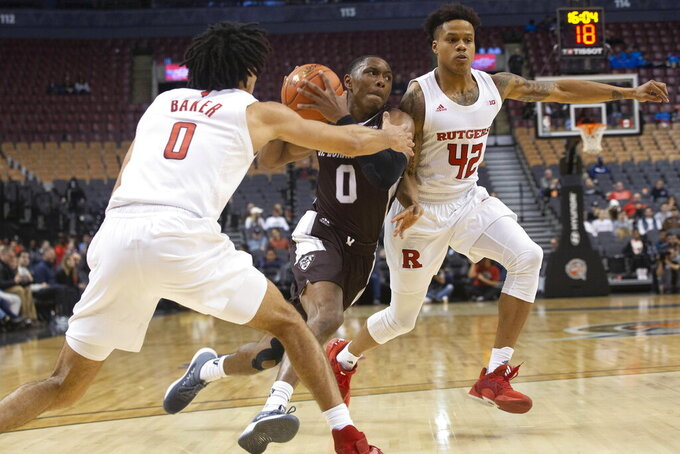 St. Bonaventure' Kyle Lofton drives between Rutgers' Geo Baker, left, and Jacob Young during the second half of an NCAA college basketball game in the James Naismith Classic in Toronto on Saturday, Nov. 16, 2019. (Chris Young/The Canadian Press via AP) 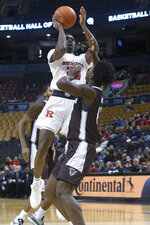 Kyle Lofton had 17 points and eight assists and Dominick Welch scored 11 points for the Bonnies, who bounced back after losing at Siena on Tuesday to fall to 0-3.

Caleb McConnell scored 13 points, Myles Johnson had 12 and Geo Baker 11 as Rutgers lost for the first time following a 3-0 start. The Scarlet Knights came in having posted home wins over Bryant, Niagara, and Drexel.

Akwasi Yeboah scored 10 points for Rutgers, which made 7 of 25 from 3-point range.

The game was the finale of the James Naismith Hall of Fame Classic, an NCAA triple header at Scotiabank Arena in downtown Toronto, home of the defending NBA-champion Raptors.

St. Bonaventure led 38-19 on a jumper by Vasquez with 3:49 remaining in the first half, but Yeboah scored six points as the Scarlet Knights closed the period with an 11-5 spurt, cutting the gap to 43-30 at the intermission.

Vasquez scored 13 points in the first half and Winston had 11 as the Bonnies recorded their highest-scoring half of the season.

Vasquez stopped the run with a 3, halting a scoreless streak of five-plus minutes.

Bonnies center Amati Ikpeze fouled out with 2:44 to play, sending Johnson to the free throw line for a pair that cut the gap to five, 70-65. Vasquez and Baker traded 3-pointers before the Scarlet Knights called timeout with 2:23 to go and the Bonnies leading 73-68.

McConnell's steal and fast-break layup made it 75-71 with 1:01 left. Lofton replied with two free throws and Vasquez split a pair, pushing the lead to 78-71 with 19 seconds remaining.

Rutgers: The Scarlet Knights recorded an assist on all nine of their first-half baskets. They finished with 18 assists on 24 made baskets.

St. Bonaventure: This was the 40th meeting between the teams but the first since 2008 and just the second since 1995. The Bonnies lost in overtime when the teams last played 11 years ago. Rutgers leads the overall series 21-19, having won 15 of the past 21 meetings.