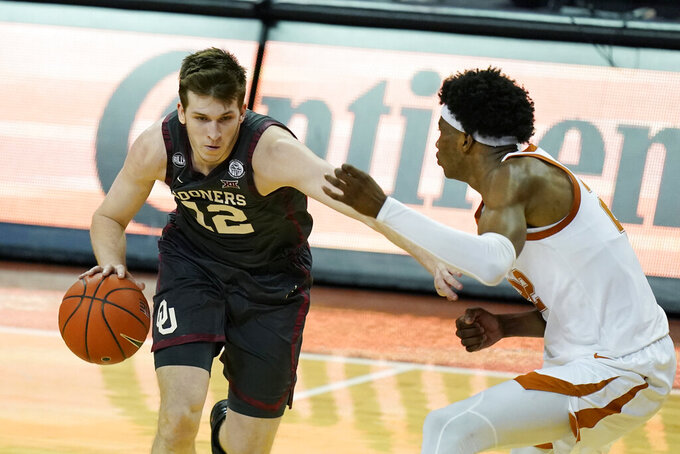 Chances are good that plenty of points will be scored when No. 9 Alabama visits No. 24 Oklahoma on Saturday in the SEC/Big 12 Challenge.

There’s just no telling where the points will come from. Austin Reaves leads Oklahoma with 15.8 points per game and John Petty Jr. paces Alabama with 13.9. Both teams have at least five available players averaging 7.5 points per game or more and four who have scored at least 20 points in a game this season.

Depth has given these similar teams multiple ways to manufacture points. Oklahoma coach Lon Kruger said he has “eight or nine” players good enough to be in the rotation at any time. The Sooners have figured out how to make it work -- they have won four straight and are coming off back-to-back wins against top 10 opponents with victories over Kansas and Texas.

“The key there is to read the situation,” Kruger said. “With this particular team, different people have stepped up at different times, different nights. It’s been a little more interesting that way, but that’s the value of depth.”

Balance has helped Alabama win 10 straight in coach Nate Oats’ second year. The Crimson Tide rank sixth nationally in 3-point goals per game, and that has propelled them to their first AP top 10 ranking in 14 years.

“You watch the program, you’d think coach Oats would have been there four or five years,” Kruger said. “He’s got people that fit his system that are connected, great energy, great enthusiasm. They love to shoot threes and they all shoot threes well. He’s done a remarkable job.”

Starting forward Jordan Bruner averages 7.8 points and 5.3 rebounds. He had a meniscus injury at Kentucky on Jan. 12 and hasn’t played since, yet the Crimson has remained unbeaten in the SEC.

Reaves has been Oklahoma’s most consistent player so far. The senior guard averages 5.1 rebounds and 5.1 assists to go with his team-best scoring total.

De’Vion Harmon has emerged in recent games for the Sooners. The sophomore guard averages 12.8 points for the season, but that has jumped to 18.3 during Oklahoma’s four-game win streak. He has shot at least 50% in all four wins.

Brady Manek, a senior, has 100 career starts for Oklahoma but has come off the bench since being sidelined due to COVID-19 protocols. He is averaging 10.9 points and 3.8 rebounds. Oats said Oklahoma is especially tough to guard when Manek shifts from forward to center.

Umoja Gibson, a transfer from North Texas, averages 8.9 points and shoots 42% from 3-point range for the Sooners and Alondes Williams averages 7.7 points and 3.4 rebounds. Kur Kuath, a 6-foot-10 forward, averages 7.5 points and 5.1 rebounds.

The Sooners also have been getting good all-around play out of Elijah Harkless and Jalen Hill. Harkless has emerged as a defensive force and has worked his way into the starting lineup.

Oats is most impressed with how Kruger has orchestrated it all.

“He does things the right way,” Oats said. “He’s built a program, he’s built a culture. They are unselfish. The ball moves. They are high IQ guys who are well coached on the defensive end.”

Oats told his players a win would help the Crimson Tide’s chances of reaching their goals.

“I told them this one’s going to go a long ways come seeding time in March,” Oats said. “So if we’re trying to make some noise in March, the higher the seed you get, the easier it is to make a run.”