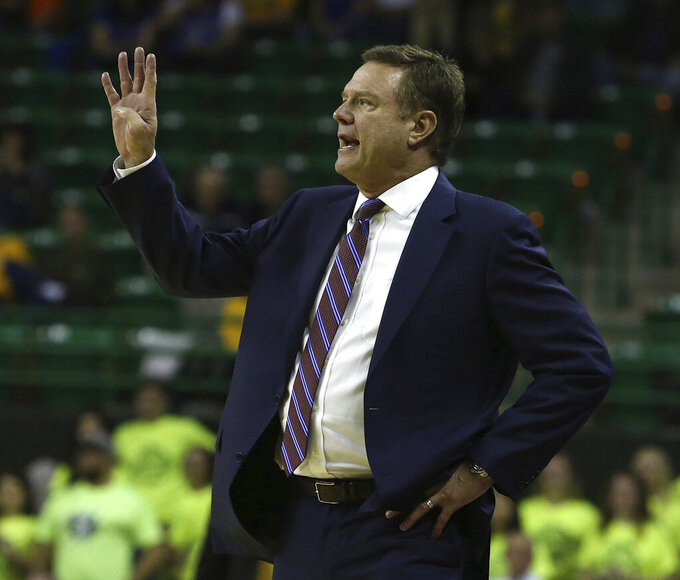 Kansas head coach Bill Self calls a play to team against Baylor in the second half of an NCAA college basketball game, Saturday, Jan. 12, 2019, in Waco, Texas. (AP Photo/Jerry Larson) 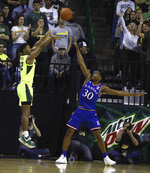 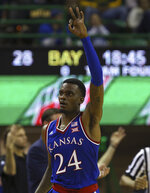 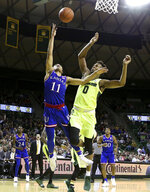 WACO, Texas (AP) — Lagerald Vick did on his 22nd birthday for No. 7 Kansas what he also does in so many other games. He made some big 3-pointers, even if the ending was a bit shaky.

Vick scored 18 points with six 3-pointers before a couple of late turnovers as the Jayhawks held on for a 73-68 win at Baylor on Saturday.

"First 36 minutes, I thought he was great," coach Bill Self said, repeating what he also said after the rest of the team. "Made a couple of hard shots at the end of the clock. He played really well. He didn't play like a senior down the stretch."

Vick hit two of his 3s in an 11-3 run in the final 1:44 of the first half to put the Jayhawks (14-2, 3-1 Big 12) up by 10 at the break after they blew almost all of a 16-point lead. Kansas then led by double-digits for most of the second half before Baylor's eight consecutive points in the final minute, when Vick had two turnovers.

Jared Butler hit a 3 with 54 seconds left and Mark Vital made a basket before Devonte Bandoo's 3 after Vick's second turnover in that span got the Bears within 72-68. The Jayhawks missed three free throws down the stretch.

Kansas had a 23-point lead with 6 1/2 minutes left, and had to hold on in that final frantic minute.

"Certainly the story that I'm leaving with is that we got a good road win today, not that we played like crap the last four minutes," Self said.

"We just have to do a better job of just finishing out games," Vick said.

Dedric Lawson added 17 points with five steals and five blocks for Kansas despite his season-low three rebounds. Devon Dotson scored 14 points while freshman Ochai Agbaji had 10 in his second game.

Baylor, playing without second-leading scorer Tristan Clark (knee surgery), missed its first 15 shots from the field over the first 10 ½ minutes. The Bears fell behind 18-2 before Butler had three 3s in an 18-4 run. The Bears were within 22-20 on a free throw by Mason with just under 4 minutes left in the half, though they never got closer.

Kansas: The Jayhawks played their second game since 7-foot center Udoka Azubuike's season-ending wrist surgery. Agabaji, the 6-5 freshman guard from Kansas City, has contributed in both games. He was 4-of-5 shooting and had a 3 late in the first half Saturday.

"He's becoming one of our best players and he's poised and he made a couple of athletic plays," Self said.

Baylor: The Bears just couldn't build on the momentum of their home win Tuesday against No. 20 Iowa State, which then was coming off a 17-point home win over the Jayhawks last weekend.

Clark was the national leader shooting 74 percent from the field. The 6-foot-9 sophomore averaged 14.6 points starting the first 14 games, but something didn't feel right in his knee after Tuesday's game. He made 84 of his 114 shots, and was on pace for the fourth-best shooting season in NCAA history. He now won't play in enough games to qualify for that.

Kansas plays its third game in six nights when the Jayhawks go home to play Texas on Monday night.

After consecutive home games, Baylor has a quick turnaround before playing Monday night at Oklahoma State.