With Villanova and USA Basketball, Jay Wright on double-duty 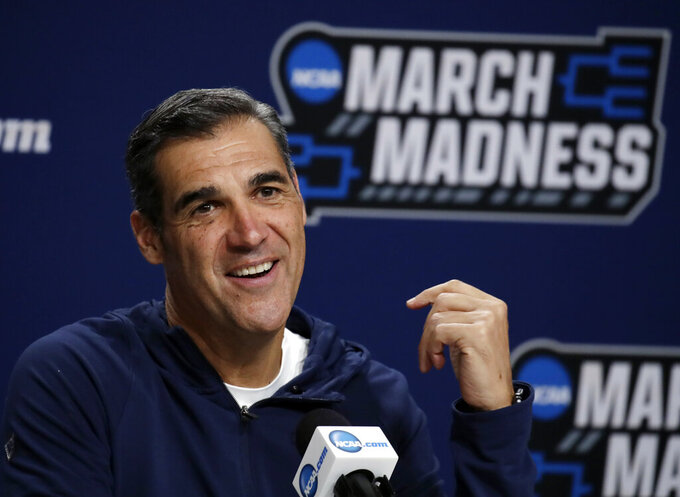 FILE - In this March 22, 2019, file photo, Villanova head coach Jay Wright speaks during a news conference at the men's college basketball NCAA Tournament in Hartford, Conn. Villanova students are headed back to school this week _ while the Villanova men's basketball coach will be halfway around the world for the next month or so. It has been, and will continue being, a major schedule challenge for Wright as he's tasked with both helping USA Basketball win a gold medal while his college players are on campus getting ready to start their seasons. (AP Photo/Elise Amendola, File)

Jay Wright immediately accepted a chance to be an assistant coach with USA Basketball for this year's World Cup.

And then he checked his calendar.

Villanova students are headed back to school this week — while the Villanova men's basketball coach will be halfway around the world for the next month or so. It has been, and will continue being, a major schedule challenge for Wright as he's tasked with both helping USA Basketball win a gold medal while his players are on campus getting ready to start their seasons.

"It was a snap 'yes.' That's the problem," Wright said. "And then after you think about it, you're like, 'wow.' Only then do you realize what you're missing at home."

To be clear, Wright said this is a problem only half-seriously.

Logistical matters weren't going to keep him from being part of the staff of assistants that include Golden State's Steve Kerr and Atlanta's Lloyd Pierce — all working under USA Basketball head men's coach Gregg Popovich of the San Antonio Spurs.

"This is basketball heaven," Wright said.

It's not uncommon for college coaches like Wright to be part of the USA Basketball mix, which can collide with college calendars. At the most recent World Cup in 2014, Duke's Mike Krzyzewski was the head coach and Syracuse's Jim Boeheim was one of the assistants — and that tournament ended in mid-September.

But at this tournament, which starts Aug. 31 in China with the Americans playing their first game against the Czech Republic a day later, Wright is the only college coach on the U.S. roster. Popovich, Kerr and Pierce all have some time before their 'real' teams start practice. Wright doesn't have that luxury.

"He's kind of doing double-duty right now," Popovich said. "He's keeping touch with his kids, and obviously doing a great job with the USA team. But he hasn't forgotten about his Villanova guys."

To make this work, Wright rearranged Villanova's summer schedule, everything from player workouts to coaching meetings. He was able to do his usual gamut of recruiting, but his usual start-of-semester matters like meeting with parents and having newcomers get acclimated now will fall on his staff of assistants until he returns.

"You don't say no to this," Wright said.

The Americans needed a 17-hour flight from Los Angeles before arriving in Melbourne, Australia, where they resumed practice on Monday. They'll play three games in Australia, the first of those coming on Thursday, before heading to China next week.

"Longest flight I've been on, but I'm happy to be here," Boston's Jayson Tatum said.

Popovich believes in a style of coaching where everyone gets a chance to argue all parts of the game — a participatory approach, like he uses in San Antonio. Wright is primarily helping with the U.S. defensive schemes, but he also gets his opportunity to offer suggestions for the offensive plans. And he's usually one of the last coaches still working on the floor after practice, running groups through shooting drills.

Wright guided Villanova to national championships in 2016 and 2018. Over the last four seasons, only Gonzaga has won more games than the Villanova — the Bulldogs have 130 wins, the Wildcats 129. And he has plenty of USA Basketball experience, like a gold medal as coach at the 2005 World University Games and a select team coach before the 2010 World Cup and 2016 Olympic runs by the senior national team.

Despite his experience, Wright notes that being around coaches like Popovich, Kerr and Pierce for umpteen hours a day has been a basketball education.

"It's such an incredible opportunity," Wright said. "We're only a couple weeks in and I've already learned so much that I can bring back to our team. It's incredible. Honestly, I feel like I've grown in two weeks as a coach, as a leader, more than I have in the last 10 years."