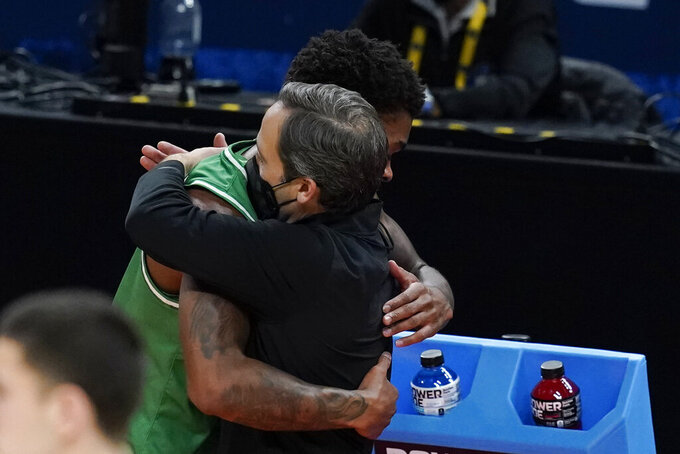 INDIANAPOLIS (AP) — As Villanova rained down 3s on North Texas, it was as if the Wildcats were channeling their recent NCAA championship teams.

The fifth-seeded Wildcats (18-6) move on to the Sweet 16 to face top-seeded Baylor. Villanova will play the second weekend of the tournament for the third time in the last five. Coach Jay Wright's team won the whole thing the last two times it got this far in 2016 and '18.

Are the Wildcats on their way again?

“I hope so, man,” Wright said with a laugh. “I don't remember all those types of stats but I like when you guys bring them up.”

The Mean Green (18-10) got off to a nice start with Javion Hamlet making some nifty moves and putting UNT up 21-13. Then Villanova tightened its defense and started making everything the way those title teams seemed to in March.

“I thought we were pretty good defensively, but it sure does help when the shots are going in,” Wright said.

With quick ball movement and excellent spacing, the Wildcats went 9 for 15 from 3-point range for in the first half and finished the first 20 minutes on a 34-6 run. And that was it for North Texas.

The older players on this Villanova team like Samuels were mostly little-used reserves on that 2018 championship team. In a way, this is their first trip to the Sweet 16.

A stifling defensive performance by the Mean Green got them into the second round, upsetting No. 4-seed Purdue for the first NCAA Tournament victory in school history.

Against Villanova, North Texas seemed to be a step behind the extra pass, scrambling to get a hand into the face of open shooters.

Hamlet scored 25 points on 8-of-16 shooting, but the rest of the Mean Green made only 13 field goals.

“We weren’t supposed to be here,” Hamlet said. “We came here and made it to the second round. That’s not something I came here to do. I came to win it all. (But) I have nothing to be mad about.”

Villanova came into the NCAA Tournament short-handed and searching for answers. The Wildcats lost point guard Collin Gillespie to a knee injury late in the season and dropped their first two games without him.

In the first round, Villanova picked it up on the defensive end, took care of the ball (six turnovers) and came away with a workmanlike victory while still shooting only 44% from the field.

In round two, it was vintage Villanova.

“They’ve been struggling from 3, but they weren’t struggling tonight,” North Texas coach Grant McCasland said. “They were sharp and tough and have that flow to them now. With the point guard being out, they’ve got games under their belt now and have their pace and they made it hard on us."

North Texas: Hamlet, a senior, exited late in the game with the rest of North Texas' starters. He got a standing ovation from the Mean Green fans in attendance and a hug from McCasland.

“I don’t have nothing to hang my head over,” Hamlet said. “As I look back, when I first came here, UNT was No. 7 in Conference USA. We went from 7 to 1 to a championship.”

Villanova: In Gillespie’s place, Chris Arcidiacono — whose brother, Ryan, was the Most Outstanding Player of Villanova’s 2016 Final Four — has moved into the starting lineup.

The younger Arcidiacono isn't being asked to carry the same responsibilities as Gillespie, one of the top point guards in the county. Running the offense has been more of a group effort. Justin Moore has picked up a lot of that slack. He scored 15 points and had five assists against UNT.

Samuels said Wright and the coaching staff have done a great job helping the players adapt to playing without Gillespie.

“They went back the drawing board try to make things as simple as possible for us and make sure the most important thing we do is play Villanova basketball,” Samuels said.

Arcidiacono made two early 3s and finished with six points.

Villanova and Baylor have played just once and the Bears won in November 2019 at the Myrtle Beach Invitational.