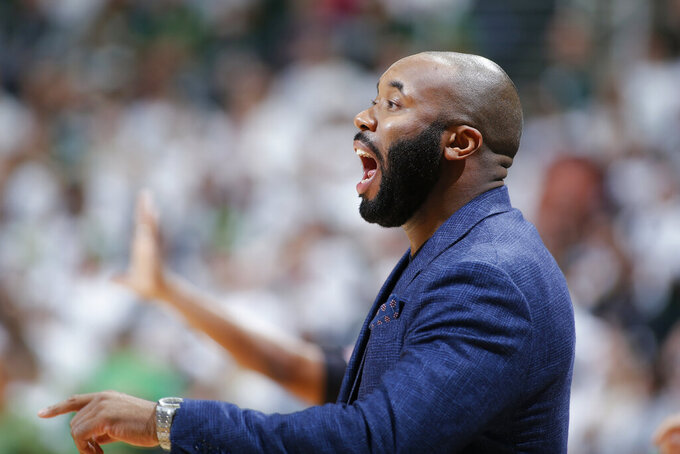 EAST LANSING, Mich. (AP) — Kyle Neptune looks young enough to suit up for a basketball team instead of wearing a blue suit with a V-neck shirt as Villanova's first-year coach.

Perhaps that explains why he often coached with at least one foot on the court in a 73-71 loss at Michigan State on Friday night.

Or, maybe Jay Wright's successor was just trying to show the officials he could also coach inside the lines as Hall of Fame coach Tom Izzo often has for nearly three decades.

In the opening minute, the 37-year-old Neptune was so close to the action that his slick wristwatch was jostled loose by Spartans forward Joey Hauser after he made a 3-pointer.

In the final seconds, Neptune stayed behind the sideline after drawing up a play in a timeout that had many options and watching Eric Dixon miss a contested 3-pointer just before the final buzzer.

“ We’ve been down a lot this year, but we’ve never stopped coming," Neptune said. “We told the guys in the locker room that mentality is going to be really good for us."

Neptune helped the Wildcats (2-2) stay calm and confident enough to rally from a 16-point deficit with 8:09 left to have a shot to win at Michigan State (3-1).

The Spartans had their crowd and momentum in their favor after they knocked off No. 4 Kentucky in Indianapolis and lost by one point to No. 2 Gonzaga on an aircraft carrier over the last week.

“Helluva job," Izzo said to Neptune during a brief exchange in the handshake line.

Later in his postgame news conference, Izzo shared some of what he said to Neptune before the game.

The two coaches do share some similarities, getting handpicked by national championship-winning coaches to take over a program in their late 30s after being assistants for their mentors.

Izzo started his head coaching career in 1995 at Michigan State, where he was a longtime assistant for the late Jud Heathcote, who coached Magic Johnson and the Spartans when they beat Larry Bird-led Indiana Sate in 1979.

Neptune went back to Villanova, where he was a video coordinator for Wright in 2008 and was later an assistant, after leading Fordham for one season.

Heathcote's retirement was not unexpected, and Izzo was the coach in waiting.

The 60-year-old Wright, though, shocked college basketball with his immediate resignation last spring after winning two national championships in four trips to the Final Fours in a Hall of Fame career.

“I went through what you're going through," Izzo recalled telling Neptune. “Give me a call, and I'll tell you what I went through.

“As the game was ending I was saying to myself, `Who the hell am I to tell him something?' He did a better job than I did. That program is in good hands."