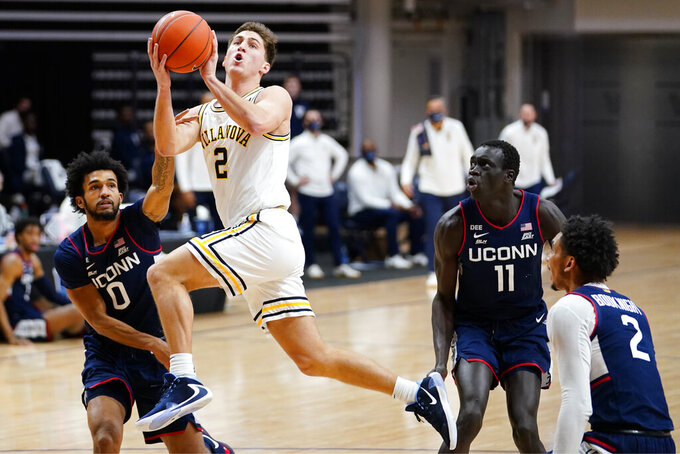 Villanova’s Collin Gillespie is ready to make the most of his second chance at a senior season.

Gillespie was the co-Big East player of the year last season but tore the medial collateral ligament in his left knee during a victory over Creighton that enabled Villanova to clinch the Big East regular-season championship.

The injury ended his senior season early and prevented him from participating in the NCAA Tournament. Gillespie now is back as a fifth-year senior and feeling healthy again.

Villanova coach Jay Wright spent part of the offseason away from campus while working as an assistant coach on the U.S. Olympic team that won a gold medal. When Wright returned, he was impressed by Gillespie’s thorough recovery and said it’s a credit to the 6-foot-3 graduate student’s work ethic.

“I went away for 37 days,” Wright said. “He was just starting to come back when I went away. When I came back, he looked perfectly fine.”

While college basketball has become more and more of a freshman-oriented game over the last decade or so, seniors could be more of a factor than usual this season since the NCAA granted athletes an extra year of eligibility due to the pandemic. Gillespie is one of the players who capitalized on this policy change.

Here’s a look at some other seniors who should make an impact this season. (Note: The list doesn’t include Texas’ Marcus Carr and Kansas’ Remy Martin, who undoubtedly rank among the nation’s top seniors but were recognized among the nation’s most noteworthy transfers.)

Alatishe was the Pac-12 Tournament’s most outstanding player last season and then helped the Beavers along in their improbable run to an NCAA regional final. The 6-8 Alatishe averaged 9.5 points and ranked second in the Pac-12 in rebounding (8.6) and fourth in blocked shots (1.39). He’s a preseason first-team all-Pac-12 selection.

Aluma, who is 6-foot-9, averaged 15.2 points and 7.9 rebounds last season in his first year with Virginia Tech. He had sat out the 2019-20 season due to NCAA transfer rules after playing two seasons with Wofford. He earned second-team all-Atlantic Coast Conference honors from a panel of coaches and media members last season. This year, he’s a preseason first-team all-ACC pick.

Boeheim, the son of Syracuse coach Jim Boeheim, averaged 17.8 points and went 77 of 201 from 3-point range last season. The 6-6 guard scored 30 points in an NCAA Tournament first-round victory over San Diego State and had 25 more in a second-round triumph over West Virginia. He’s a preseason first-team all-ACC selection.

In his first season with Florida since transferring from Michigan, Castleton ranked second in the Southeastern Conference with 2.25 blocks per game and also averaged 12.4 points and 6.4 rebounds last year. The SEC’s coaches made him a second-team all-conference pick. This year, the 6-11 center is a preseason first-team all-SEC pick.

The 6-5 Scruggs led the Big East with 5.7 assists per game last season. He also ranked 11th in the conference in scoring (14.00) and third in steals (1.6). Scruggs was a second-team all-Big East selection last year. He’s a unanimous preseason first-team choice this year.

Williams was a first-team all-Big Ten selection last year who averaged 15.5 points, 9.1 rebounds. The 6-10 Williams was one of only six players to average at least 15 points, nine rebounds and two assists. He ranked ninth in the Big Ten in scoring and second in rebounding.