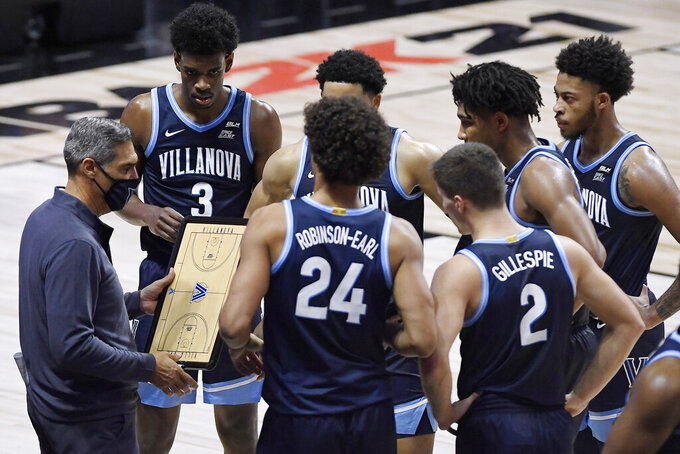 Villanova coach Jay Wright talks with the team during the first half of an NCAA college basketball game against Boston College, Wednesday, Nov. 25, 2020, in Uncasville, Conn. (AP Photo/Jessica Hill)

UNCASVILLE, Conn. (AP) — No. 3 Villanova is extending its stay in Connecticut's “Bubbleville” and coach Jay Wright says the Big East might want to look at the format for its tournament this season.

The “Bubbleville” event is an the 11-day gathering of college basketball teams at the Mohegan Sun resort casino for early season nonconference play.

Teams are given their own hotel floor and their own meeting and dining areas. They are isolated from other competitors and casino visitors by using back-of-house-passageways and receive daily coronavirus testing.

The casino had already installed safety devices as part of its reopening in June, including ultraviolet lighting and special filters in its HVAC system.

“You feel safe,” Wright said. “You know you can get a game in here and you know the team you're playing is going to be safe. I think that's going to be important throughout this year to find environments like this.”

There are several tournaments and stand-alone games being played in the modified bubble through Dec. 5.

Villanova has already won two games this week at Mohegan Sun, beating Boston College, 76-67 on Wednesday and No. 18 Arizona State 83-74, on Thursday night to win the Empire Classic.

The Wildcats have added a third game at the arena, which will be played on Saturday night against Virginia Tech.

Temple had been scheduled to be the Hokies’ opponent for that game, but the Owls said Thursday they were was pausing team activities for 14 days following a positive coronavirus test in the program. That also means they won't play Villanova in Philadelphia next week.

In order to play the Virginia Tech game, Villanova reached an agreement to move its home opener with Saint Joseph's from Monday to Wednesday.

Wright said he expects more schedule shuffling throughout the season and said the key will be finding games that are safe to play.

“You don't know what the world is going to be like at Big East tournament time,” Wright said. “But you can seek how this would definitely work of a Big East Tournament.”