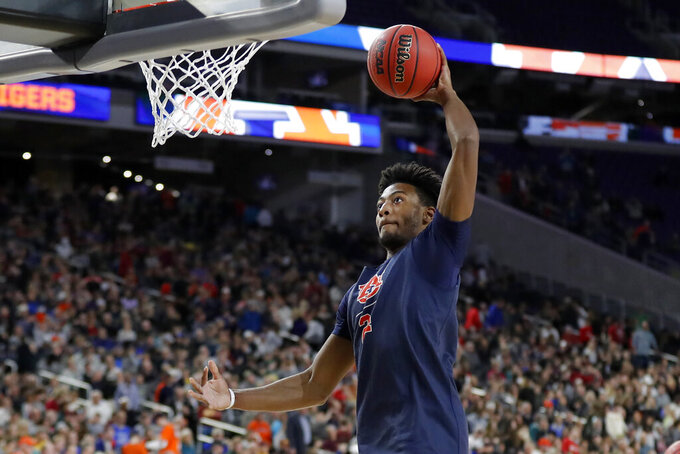 Auburn's Bryce Brown (2) goes up for a shot during a practice session for the semifinals of the Final Four NCAA college basketball tournament, Friday, April 5, 2019, in Minneapolis. (AP Photo/Charlie Neibergall)

MINNEAPOLIS (AP) — Virginia and Auburn meet at the Final Four in the latest installment of a long-running competition in basketball: Slow and steady vs. fast and furious.

The top-seeded Cavaliers are rarely in a hurry, playing a style as deliberate and methodical as the Supreme Court. The Tigers take a frenetic approach. More like Judge Judy.

The first national semifinal Saturday at U.S. Bank Stadium is likely to be decided by whether Auburn or Virginia dictates the pace of play.

"We're not going to compromise on how we play, but at the same time, our style of play is just to win," Virginia guard Kyle Guy said.

Uncompromising is a good way to describe Cavaliers coach Tony Bennet's philosophy, which was passed down by his father, former longtime coach Dick Bennett. The Cavaliers' pack line defense and milk-the-clock offense can lead to ugly games. When Virginia became the first No. 1 seed ever to lose an NCAA Tournament game to a 16-seed last season, critics of that style were quick to pounce.

The Cavaliers owned the UMBC upset and came back stronger this season, better than ever offensively under Bennett, but steadfast in their approach.

According to KenPom metrics that measure pace of play, Virginia is among the slowest in Division I.

"To be honest I feel like we just have to keep playing the way we've been playing, pushing the ball in transition," Auburn guard Bryce Brown said. "We may have to make more 3s than usual."

While facing Virginia is a test of patience, Auburn wants to make the opposition feel rushed.

The Tigers rank 153rd in the country in KenPom's pace of play metric, and 69th in average length of offensive possession at 16.9 seconds. Coach Bruce Pearl's team will take some chances defensively. That could lead to a forced turnover or a quick basket. Either way, the Tigers keep it moving.

"We turn people over almost 25 percent of the possessions," Pearl said. "They don't turn the ball but nine times in a game, and the more you try to turn them over, the better you make their offense."

As much as Virginia has become synonymous with stifling defense under Bennett, the Cavaliers come into this game as the third-most efficient offense in the country based on points per possession.

Only Savannah State shot more 3-pointers this season than Auburn. The Tigers have hoisted 1,083 attempts from long range, making 37.9%, led by star guards Brown and Harper. Brown is Auburn's career leader in 3s made with 378.

More things to know about the third meeting, and first since December 2004, between Virginia and Auburn.

The Tigers lost star forward Chuma Okeke to a season-ending knee injury in the Sweet 16 victory against North Carolina. The sophomore is the team's third-leading scorer and top rebounder. He had surgery to repair a torn ligament in his left knee earlier this week and is not expected to be in Minneapolis for the game.

Without Okeke, Danjel Purifoy played a bigger role against Kentucky in the Midwest Regional final victory that sent Auburn to its first Final Four. The junior played a season-high 32 minutes against the Wildcats and scored six points with seven rebounds. Anfernee McLemore, another junior, also played a season-high 30 minutes against Kentucky, scoring eight points with five rebounds.

"It took a little adjustment at first, but I just feel like a lot of people stepped up in that moment," Brown said.

MORE THAN A SHOT HUNTER

Hunter is Virginia's most talented player, a possible lottery pick, but he has struggled on the offensive end in this tournament.

The sophomore is 53.8% shooter on the season, but he's at 43.8% from the field and 27.8% from 3 in the last four games. He did make some key plays in the overtime victory against Purdue that wrapped up Virginia's first Final Four appearance since 1984.

"He certainly impacts the game with his defense and everything he does," Bennet said. "So part of this is him growing and learning, but we're going to need everybody at their best to continue on in this tournament."