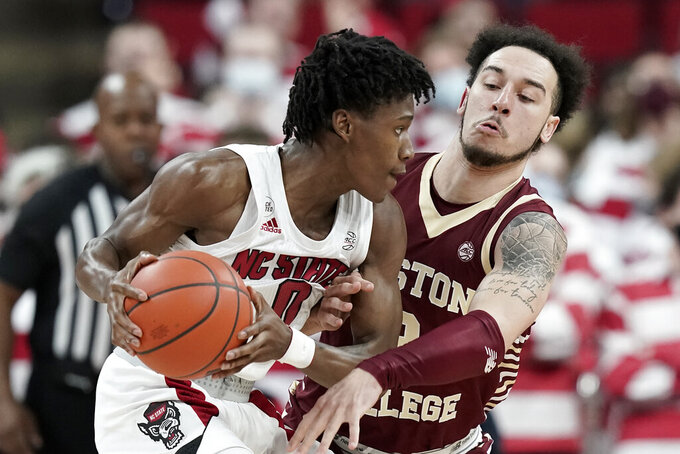 Virginia Tech at Miami. The Hurricanes (20-8, 12-5) are chasing a top-four seed in the ACC Tournament and the double-round bye that goes with it, as well as continuing to maintain their footing for an NCAA Tournament bid. The Hokies (17-11, 9-8) are facing an uphill climb to reach that goal, though they have won seven of eight since a 2-7 league start.

North Carolina (20-8, 12-5) faces a quick turnaround from Saturday’s trip to rival North Carolina State, hosting Syracuse in its home finale Monday. The Tar Heels are two games ahead of Wake Forest and Virginia for the final top-four seed in the ACC Tournament, though they’re still trying to bolster an uncertain NCAA Tournament resume.

North Carolina’s Armando Bacot’s rebounding and double-doubles totals this year are rivaling some of the best in program history. Bacot has 21 double-doubles, two behind Brice Johnson’s program record set in 2015-16. Bacot also has the chance to tie Johnson’s mark for the most games of at least 10 rebounds in a season Saturday. Bacot ranks third nationally in rebounding (12.3) and tied for second in double-doubles entering Thursday’s games.

Notre Dame (12-1 at home) is the only league team to avoid multiple home losses this season. … League-leading Duke hasn’t won an ACC regular-season title since the 2009-10 season, which saw the Blue Devils also win the ACC Tournament as well as Mike Krzyzewski’s fourth NCAA title. They have won three ACC Tournament titles since. … The Blue Devils’ 65-61 win at Virginia on Wednesday marks the seventh time in nine meetings that the margin was four or fewer points. … Boston College’s win against N.C. State on Wednesday marked its second February win. The Eagles host Clemson on Saturday with a chance to win at least three February games for only the fourth time in nine seasons. … N.C. State’s Terquavion Smith hit four 3-pointers in Wednesday’s loss to BC, with his league-high 83 3s breaking the program single-season freshman record. … Syracuse guard Joseph Girard III ranks 12th nationally by shooting 89.7% at the foul line (70 for 78). He’s pursuing Gerry McNamara’s single-season program record of 90.9% in 2002-03 (90 of 99).

It’s the final week of the regular-season race, with No. 3 North Carolina State already clinching the No. 1 seed for the ACC Tournament, as well as at least a share of the program’s first regular-season title since 1989-90.

The drama now is focused on which other teams will claim a top-four seed and the double-round bye that goes with it.

Fourth-ranked Louisville secured the 2-seed with Thursday's win at Pittsburgh, leaving No. 14 Notre Dame, No. 18 North Carolina and No. 23 Virginia Tech jostling for the other two spots.