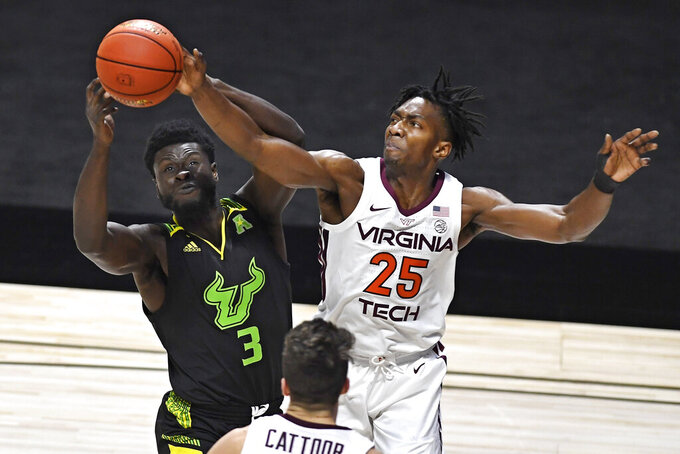 Keve Aluma added 12 points for the Hokies, Hunter Cattoor added 13 while Pemsl and Cartier Diarra scored 10 each. Virginia Tech shot 54% from the floor with 11 assists on 27 baskets.

Virginia Tech (3-0) was caught up in the COVID-19 drama at Bubbleville as Temple, originally scheduled as its second game, went into quarantine after a player tested positive. The Owls were replaced at the last minute with Villanova, ranked No. 3 in the AP Top 25 poll.

David Collins scored 10 points for the Bulls (1-2) and, making 3 of 6 from the free throw line he became the all-time leader in career free throws made in the American Athletic Conference. Collins pushed his total to 438, passing former Cincinnati guard Jarron Cumberland (437).

Aluma hit a 3 at the halftime buzzer for a 36-23 lead, closing with a 15-5 run over the last seven minutes to break open what had been a tight game. Pemsl scored six points in the breakaway run.

The teams had not played since 1995 when both were in the Metro Conference. Tech's coach Mike Young had been 0-3 against USF’s Brian Gregory, facing him when the two were at other schools.