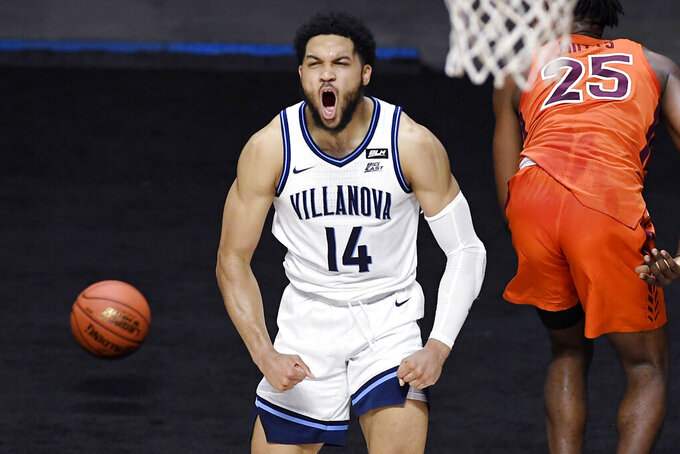 UNCASVILLE, Conn. (AP) — Virginia Tech overcame some late-game adversity to dominate overtime and upset No. 3 Villanova just a day after learning they would be playing the Wildcats.

“I thought we guarded so very well throughout and we did it again over a five-minute period in the overtime and found a way to win,” Coach Mike Young said. “A huge win for us.”

Collin Gillespie scored 18 of his 25 points in the first half for Villanova (2-1). Caleb Daniels added 17 points and Jeremiah Robinson-Earl finished with 14 for the Wildcats.

The teams were tied at 29 after 20 minutes and deadlocked at 38 five minutes into the second half.

The Wildcats appeared to take control of the game from there, going on an 11-0 run and holding the Hokies scoreless for five minutes.

“You learn when you have a lead and you're playing against a good team, you've got to play every possession until the end," Villanova coach Jay Wright said. “So, we're definitely going to learn that the hard way.”

Virginia Tech chipped away and led 64-62 lead with 1.3 seconds remaining on an odd three-point play by Aluma, who scored on a beautiful assist from Cartier Diarra in the lane, and then unintentionally banked in a free throw he was trying to miss.

Villanova's Justin Moore then drew a charge on Justyn Mutts on the inbounds play and Moore's two foul shots sent the game into overtime tied at 64.

Mutts made up for that mistake by scoring the first five points in extra time and the Hokies never relinquished the lead.

“That was a key, just keeping our cool and feeding off our bench's energy, that helped us through the game,” Aluma said.

The game was an unexpected third in four days for Villanova in“Bubbleville,” the 11-day gathering of college basketball teams at the Mohegan Sun resort casino for early season nonconference play.

The Hokies were supposed to face Temple on Saturday, but the Owls were forced to pause team activities for two weeks on Thanksgiving after a positive coronavirus test in the program. That meant canceling not only Saturday's game, but a contest that had been scheduled for Dec. 3 at Villanova.

That left both the Hokies and the Wildcats at the Mohegan Sun looking for a game.

Young took the blame for his team failing to close the game out in regulation, admitting his didn't prepare his team for the possibility that Aluma would accidentally make his foul shot.

Villanova then baited Mutts into a charge on the baseline, a call that originally went against Villanova but was reversed.

“I failed to coach my player on one of the oldest tricks in the book and it almost cost us,” Young said. “So, nobody's fault but mine.”

Virginia Tech: Neither team has anyone over 6-foot-9 on the roster, but the Hokies outscored Villanova 32-22 in the paint and outrebounded the Wildcats 40-31.

“I’m not sure we've ever outrebounded anyone,” Young said. “I’m not sure we ever outscored another team, certainly not in the Atlantic Coast Conference in the paint. That’s what I’m comfortable with. That’s how I’ve always wanted to play.”

Villanova: The Wildcats' bench scored just eight points against the Hokies, who got 25 points from their reserves.

This is the second straight year the Hokies have upset the No. 3 team in the country in an early season nonconference game. The Hokies upset Michigan State last November in Maui.

Virginia Tech: The Hokies stay in “Bubbleville” for a Sunday night game against South Florida.

Villanova: The Wildcats head home to play Saint Joseph's, a game that was moved from Monday to Wednesday as part of the schedule reshuffling resulting from Temple's virus issues.