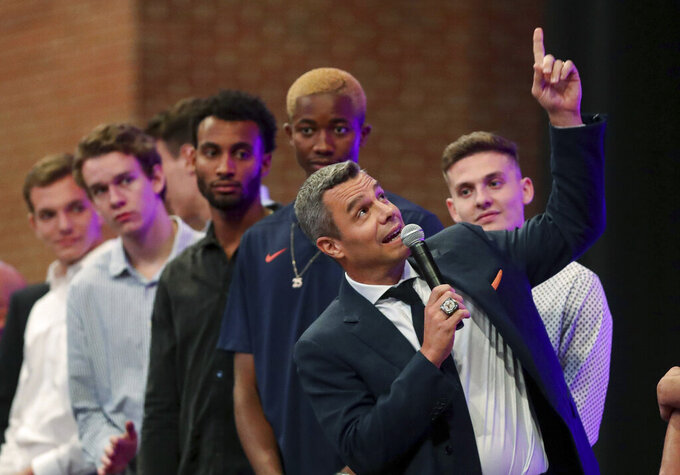 CHARLOTTESVILLE, Va. (AP) — Virginia men's basketball coach Tony Bennett has declined a pay raise offered by the school and instead asked school officials for additional compensation for his staff and program improvement.

University officials said in a news release Monday that Bennett did sign a one-year contract extension, but instead of a pay hike for himself, the coach asked athletic director Carla Williams to focus his staff and the program. The release also stated that Bennett and his wife also made a $500,000 contribution toward a career-development program for current and former players.

It is unclear how much of a raise Bennett declined.

Bennett earned nearly $6 million last season and received a $1 million retention bonus. The extension means Bennett is under contract with the school for the next seven years.

"I have more than enough," Bennett said in the release, adding that the gift was his wife's idea. "If there are ways that this can help out the athletic department, the other programs and coaches, by not tying up so much (in men's basketball), that's my desire."

Williams said coaches turning down raises "just does not happen in our industry."

The Cavaliers won their first national championship in April with an overtime victory against Texas Tech. The run to the championship came a year after Virginia made NCAA Tournament history by losing to UMBC and becoming the first top-seeded team to lose to a 16th-seeded team.

Bennett's record in his 10 years at Virginia is 254-89 and includes seven NCAA Tournament appearances and one trip to the NIT.

School President Jim Ryan lauded Bennett for his humility, and Bennett and his wife for their generosity.

"Tony's decision — to turn down a well-deserved raise and instead invest in his players and UVA athletics more broadly — tells you everything you need to know about him as a leader and as a human being," Ryan said. "Tony is one of the most selfless people I've ever met, and this is just the latest example."