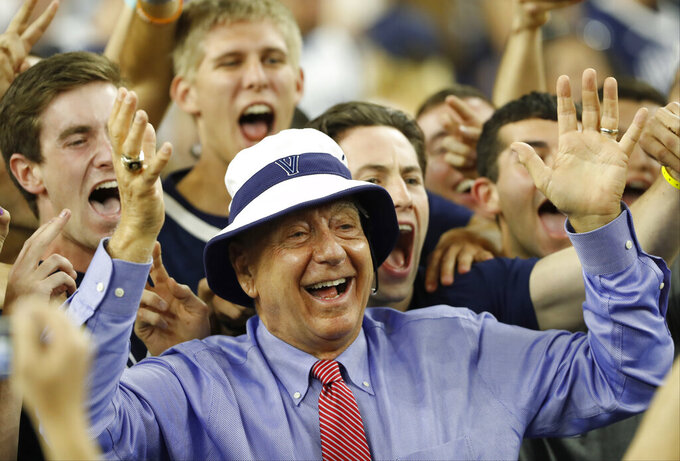 FILE - In this April 4, 2016, file photo, sportscaster Dick Vitale poses with Villanova fans before the NCAA Final Four tournament college basketball championship game between Villanova and North Carolina in Houston. Vitale didn't know if he would reach this year's $5 million goal of raising money for pediatric cancer research due to the coronavirus pandemic. It turns out he has met his goal and then some. Vitale's annual gala has already reached $7 million going into Friday's event, which will be virtual this year. (AP Photo/Eric Gay, File)

Dick Vitale didn't know if he would reach this year's goal of raising $5 million for pediatric cancer research due to the coronavirus pandemic.

It turns out he has met his goal and then some.

Vitale's annual fundraising gala has already reached the $7 million mark going into Friday's event, which will be virtual this year. The gala is usually held in May in Sarasota, Florida, but was rescheduled due to the COVID-19 crisis. It will be a combination of live and taped segments with Vitale hosting from his home in Florida and ESPN's Kevin Negandhi at network headquarters in Bristol, Connecticut.

This is the 15th year for the Dick Vitale Gala, which is held in association with the V Foundation for Cancer Research. Vitale has raised nearly $30 million for pediatric cancer research

“I was down a little bit because we couldn't get everyone together but then it made me work harder,” Vitale said. “There are a lot of people that have been successful who have responded despite what has happened."

The gala usually draws 900 people. Vitale said organizers will try their best to replicate the in-person event, including the emotion of seeing kids describe their experiences with cancer.

“There is always such emotion and passion in the room. Hopefully it will happen with the virtual event,” he said.

The theme of this year's event is “Passion 4 Pediatrics.” Coaches Bruce Arians (Tampa Bay Buccaneers) and Mark Few (Gonzaga basketball) will be honored as well as ESPN's Stephen A. Smith.

Two research grants will be awarded in honor of Chika Jeune and Will DeGregorio. Albom was a guardian of Jeune, who was diagnosed with

, an inoperable brain tumor, when she was 5 years old.