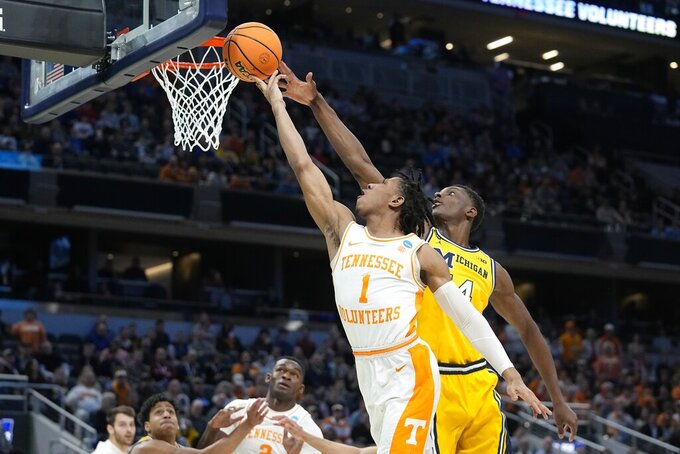 Tennessee's Kennedy Chandler (1) has his shot blocked by Michigan's Moussa Diabate (14) during the first half of a college basketball game in the second round of the NCAA tournament, Saturday, March 19, 2022, in Indianapolis. (AP Photo/Darron Cummings)

KNOXVILLE, Tenn. (AP) — Tennessee point guard Kennedy Chandler has declared for the NBA draft and is signing with an agent after his freshman season with the Volunteers.

Chandler announced his decision Tuesday in a social media post.

“I am humbled to be in a position where I am so close to a lifelong dream,” Chandler wrote.

He thanked Tennessee coach Rick Barnes for coaching him with high standards and holding him accountable. He also said he will miss his teammates whom Chandler credited with being patient with the freshman, allowing him to lead. Chandler also thanked Tennessee fans.

Chandler came to Tennessee as a five-star recruit and the top-rated point guard in the class of 2021. He helped lead the Vols to their first Southeastern Conference Tournament title in 43 years. Tennessee finished the regular season with a No. 5 ranking before losing to Michigan in the second round of the NCAA Tournament.

The freshman point guard started all 34 games for Tennessee. Chandler led Tennessee in scoring, averaging 13.9 points with a team-high 4.7 assists per game.

Chandler announced he will be hiring agent Ryan Smith.