Wade, Pearl trying to build on success amid NCAA questions 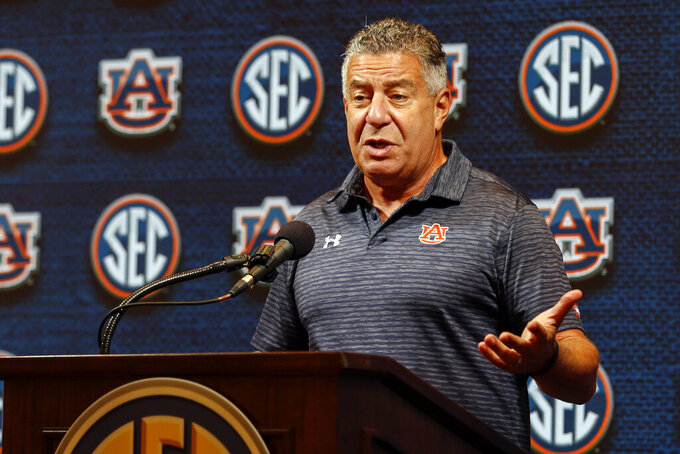 BIRMINGHAM, Ala. (AP) — Auburn coach Bruce Pearl and LSU's Will Wade are both hoping to build on big seasons while dealing with a major potential challenge for their respective programs off the court.

Both programs were at the center of a federal corruption investigation into college basketball. Pearl and Wade are still coaching and trying to keep those winning ways going on the court. They spoke with optimism about the state of their teams Wednesday at Southeastern Conference media day, but there is still uncertainty surround the teams.

LSU is coming off an SEC regular-season title while Auburn made its first run to the Final Four.

What the coaches can't control is what the NCAA does, and what repercussions might come in the aftermath, if any.

Auburn expects to receive a notice of allegations from the NCAA stemming from a bribery scheme involving former assistant coach Chuck Person, who has been sentenced in federal court for his actions. Pearl wasn't accused of any wrongdoing by federal investigators but does have a past run-in with the NCAA from his Tennessee days.

LSU suspended Wade through the postseason after he declined to meet with then-athletic director Joe Alleva about a leaked FBI wiretap transcript that raised questions about whether the coach committed recruiting violations.

LSU reinstated Wade in April , two days after the coach met with school and NCAA officials. Asked if he ever doubted he'd be back this season, he said: "I felt good about things."

Alleva said he had little choice except to reinstate Wade because there was no evidence showing the coach violated NCAA rules.

"I have no idea what the NCAA is going to do at this point," Wade said, "but we're very, very comfortable and confident with how we've run our program."

Kansas and North Carolina State have each already received a notice of allegations stemming from the federal probe.

Pearl, meanwhile, has a checkered past with the NCAA. He came to Auburn in the final months of a three-year show cause for violations — and lies about them — that led to his firing at Tennessee.

Auburn has said it expects to receive a notice of allegations, saying in a victim impact statement in federal court that the school was a "victim" of Person's bribery scheme. Auburn found that current players Austin Wiley and Danjel Purifoy or their families received money from Person.

Both players sat out the 2017-18 season and the NCAA's punishment of Purifoy extended into last season as well.

"I would say that adversity reveals character way more than it builds it, so I'd like to think the last couple years our character has been revealed, because these have been some challenging times," said Pearl, who received a new five-year, $20 million contract in April. "So we've done a lot of things the right way in that situation, and we're not done yet, but I'm confident in the process."

He said he wasn't worried about its potential impact on him personally. "I'm very confident in the process," Pearl said.

Auburn's investigation found that Purifoy's parents received some $4,500 in cash and hotel rooms from Person. Purifoy received $1,250 of that, according to Auburn.

Wiley, whose father is a cousin of Person, received spending money totaling some $800 from the then-Auburn assistant during his freshman year.

"He wants us to focus on the season," the senior center said. "If it's not pertaining to us, we have no reason to even talk about it. So we're going to let that be."

Added forward Anfernee McLemore: "I hear about it sometimes, but I really just try to focus on school and things. I don't know any specifics of any allegations or anything like that, but I just kind of let it go through one ear and out the other."