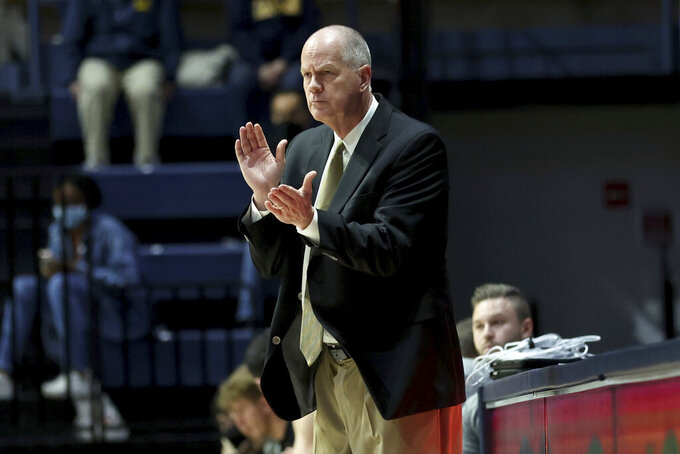 Colorado head coach Tad Boyle cheers on his team during the second half of an NCAA college basketball game against California in Berkeley, Calif., Thursday, Feb. 17, 2022. (AP Photo/Jed Jacobsohn)

BERKELEY, Calif. (AP) — Jabari Walker had 19 points and 15 rebounds and Colorado used a big second half to earn its fourth straight win, knocking off California, 70-62, on Thursday night.

The Golden Bears, who swept a road trip to Oregon State and Oregon last week, built a 35-28 lead at intermission, but it disappeared in a hurry with Walker scoring 13 points and pulling down 11 rebounds in the second half.

Colorado opened the second half on a 14-1 run capped by back-to-back 3s by Evan Battey and Keeshawn Barthelemy, to take a 42-36 lead less than five minutes into the period. After Cal pulled within four at 46-42, the Buffaloes went on an 15-1 run to push their lead into double digits, 58-43 with 6:44 left.

Battey finished with 18 points and six rebounds and KJ Simpson added a career-high 19 points off the bench.