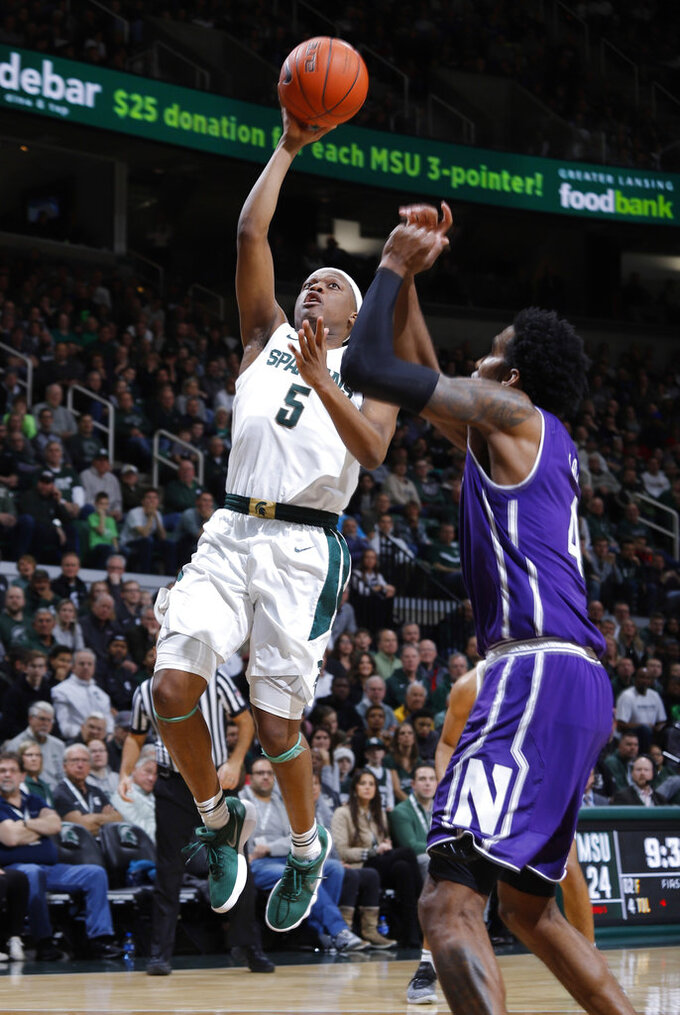 Michigan State's Cassius Winston, left, goes up for a layup against Northwestern's Vic Law during the first half of an NCAA college basketball game, Wednesday, Jan. 2, 2019, in East Lansing, Mich. (AP Photo/Al Goldis) 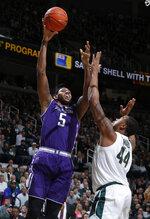 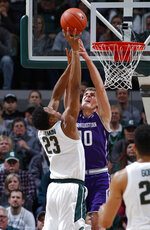 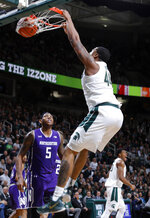 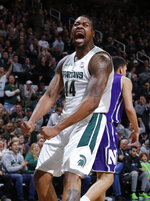 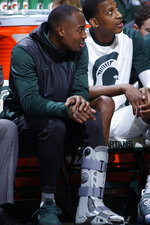 EAST LANSING, Mich. (AP) — Nick Ward was so dominant in the first half he didn't have to score after halftime to help No. 8 Michigan State stay undefeated in Big Ten play.

Ward scored all 21 of his points in the first half to give the Spartans build a big lead and they went on to beat Northwestern 81-55 Wednesday night.

The 6-foot-9 post player took full advantage of being defended by only one player on most possessions.

"I guess that was there game plan, but I liked it," Ward said.

The Spartans (12-2, 3-0 Big Ten) have won seven straight this season and 10 consecutive games against the Wildcats.

Northwestern (9-5, 0-3) had won three of four, losing only to No. 23 Oklahoma in overtime, and coach Chris Collins hopes his players are mad about how poorly they played.

"Hopefully, we're angry," Collins said. "It's not fun to get beat like that."

Michigan State made up for the loss of shooting guard Joshua Langford, who missed the game with an injured left ankle, with five players scoring in double figures.

Northwestern's Derek Pardon scored 19 points and didn't have much help offensively as the only player in double digits on his team. Vic Law, who entered the game averaging a team-high 18.9 points for the Wildcats, had just five points on 2-of-8 shooting.

"It wasn't our finest hour, but a lot of that has to do with how good Michigan State is," Collins said.

Ward missed both of his shots in the second half and didn't score. He didn't have to contribute more offensively because his teammates didn't have any trouble keeping the team's comfortable cushion.

Izzo said he didn't play Ward much because he feared he may get ejected because of how physical nature of the game.

"I had to take him out," he said. "I couldn't take a chance with an altercation."

Collins called his last two timeouts early in the second half — 41 seconds after halftime and 4:30 into the half — trying to slow down the Spartans.

"That was frustration on our part," Collins said.

Michigan State led by 30-plus points at times in the second half and coasted to an easy victory.

Tillman has become Izzo's best player off the bench and one of his most consistent players on the roster. He is averaging more than 10 points over the last eight games and has grabbed at least seven rebounds in each of those games.

"Solid would be the best word I can give you," Izzo said.

Northwestern: The Wildcats may need to get their confidence back after getting routed following closely contested setbacks in Big Ten play and having a recent run of success, losing only to the Sooners. Northwestern lost by just two points to then-No. 5 Michigan, by two points at Indiana and by seven in overtime against Oklahoma in December.

Michigan State: The Spartans showed they can overcome missing a key player. Langford, who averages 15 points a game, missed the game with an injured right ankle. Ahrens started in his place and scored 11 points, his highest total since he had a career high 15 points in a loss to Louisville in November.

"I'm excited to play there," said Ward, who is from Gahanna, Ohio. "I haven't won on that court yet."