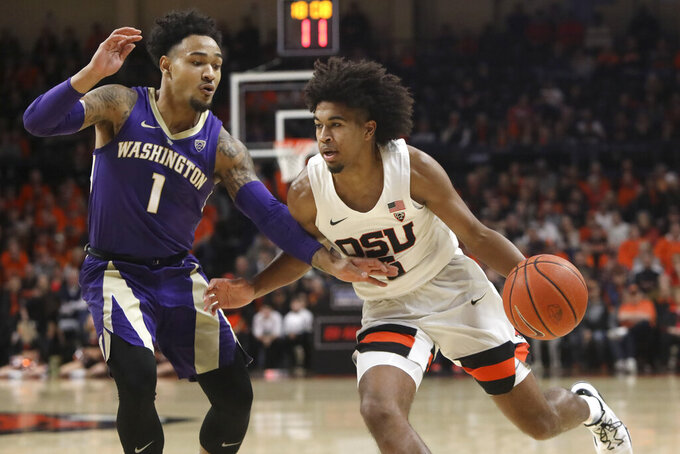 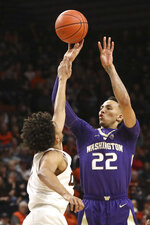 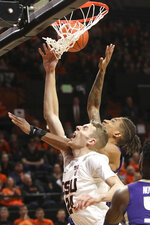 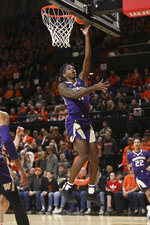 CORVALLIS, Ore. (AP) — Nahziah Carter saw the nation's leading shot-blocker moving to protect the rim, but he still drove the lane and elevated.

"I just feel like nobody could block my dunk, so I went up," said the sophomore forward, who acknowledged he was eager to see replays of the slam.

Carter had highlight-reel dunks and 18 points with three steals as Washington used suffocating defense to beat Oregon State 79-69 on Saturday.

Washington coach Mike Hopkins said it was his team's most complete game of the season.

"Give credit to Washington for coming out and being the aggressor, knocking us back on our heels," said Oregon State coach Wayne Tinkle, who added that the Huskies were the more physical team.

The Huskies' zone stifled Oregon State, forcing the Beavers into 44 percent shooting and 15 turnovers. Washington scored 25 points off those turnovers, shot 58 percent from the field and had 12 turnovers.

Washington forced five early turnovers and took an 11-0 lead after a Matisse Thybulle steal and breakaway dunk at the 17:01 mark.

"We were setting the tone, just letting them know . It's not going to let up for the whole game. It's going to be a long 40 minutes," Crisp said.

A 7-0 run — including a ferocious dunk and-one by Carter over rim protector Kylor Kelley, then a Carter steal and dunk on the next possession — put the Huskies up 22-7 with 11:38 remaining in the first half.

The Huskies led by as many as 21 in the second half, and late Thompson 3-pointers made the score seem more respectable.

Thybulle, the reigning Pac-12 defensive player of the year, finished with 11 points and five steals.

Washington: The Huskies last started 7-0 in league play in 1952-53, when they went 14-0 to begin conference action and advanced to the Final Four. . Washington is receiving votes in The AP poll. Three of the Huskies' losses are to ranked teams, and a road performance like Saturday's could help perception about the squad.

Oregon State: There was no "Stevie" miracle this time. The last two games against the Huskies at Gill Coliseum, Thompson hit game-winning 3-pointers, including a dagger in double overtime last season.

In the midst of a nine-game winning streak, the Huskies have a mandate to enjoy themselves on the court. "You go look at our white board, it was huge, in the middle of the white board, it said, 'fun,'" Crisp said. "Everybody likes each other, everybody loves each other here, so it's definitely fun."

Kelley, who leads the nation in blocked shots with 3.89 per contest, had his first game of the season without a block. Kelley was limited by foul trouble and finished with just three points and four rebounds.

Hopkins said that the Huskies feed off of the highlight slams of "Naz," as well as Carter's aggressive play in general. "His dunks give you energy. His defense gives you energy. His confidence is hard to contain and when he's in a confident mode, his drive, it's hard to keep him in front," Hopkins said.

Oregon State: At Colorado on Thursday.