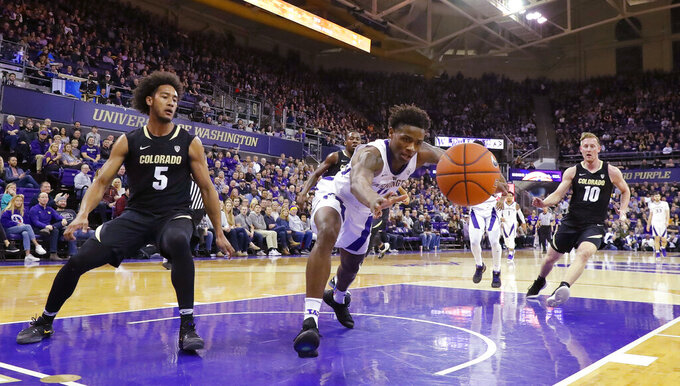 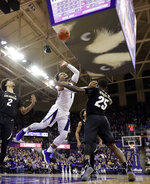 SEATTLE (AP) — The general reaction from Matisse Thybulle and his teammates to Washington clinching at least a share of the Pac-12 regular season title was subdued at best.

The Huskies want the conference title outright and they'll have plenty of opportunity to reach the accomplishment.

"Apparently we accomplished getting a share of the Pac-12 championship. That means nothing to us, we want to win it all," Thybulle said. "We're grateful for the opportunity we have in front of us, we're grateful for where we are. We're just looking at the next game."

Thybulle put the Huskies on the cusp of an outright conference title after leading Washington to a 64-55 win over Colorado on Saturday night. The senior continued to build a resume that may have him in the lead for conference player of the year honors with 17 points, six steals and five blocked shots.

Jaylen Nowell added 12 points as the Huskies (22-5, 13-1 Pac-12) won for the 15th time in 16 games and claimed a share of the league title with four regular season games remaining. It's the first time Washington has claimed a piece of the conference crown since the 2011-12 season and the Huskies need just one win in their final four games to earn the league title outright.

The turnaround orchestrated in just two seasons under Mike Hopkins has Washington back on top of the conference and seemingly headed to its first NCAA tournament berth since 2011 no matter what happens the rest of the conference season or in Las Vegas at the Pac-12 tournament.

"Guys kept getting better and started buying in. Learnability was fast. But I always had a vision of knowing we definitely could do this. I just never had a timeline," Hopkins said.

Thybulle was once again the instigator of Washington's defense that has held every conference opponent except Arizona State to 70 points or less. The Huskies forced 19 turnovers and Thybulle moved into second place on the conference's all-time steals list, trailing only Gary Payton. Thybulle has 301 career steals.

"He does something better than anybody does in the country," Hopkins said of Thybulle. "He had a great offensive game tonight too. He's just a heck of a player... Defensively he wears a different cloth out there. Incredible."

David Crisp added 10 points and Washington improved to 14-0 at home this season.

Colorado shot 52 percent in the second half and outrebounded Washington by 11 for the game, but couldn't overcome an 18-point deficit midway through the second half.

"The one thing you can't do with Matisse Thybulle, is you cannot simulate him in practice. You just can't," Colorado coach Tad Boyle said. "We work against the zone in practice and we get great ball movement, you know, it looks really good, and then you get out here and it's a little different animal that is in the Washington Huskies uniform then what we've got in practice."

Thybulle scored in the lane for Washington and after several minutes of empty possessions Thybulle added a free throw with 3:25 left for a 62-50 lead. That proved to be enough as Colorado went more than 5 1/2 minutes without scoring, committing four turnovers during the stretch.

"We got down 18 and then we started to play, and guarded them down the stretch," Boyle said. "But we've got to do it for 40 minutes."

Colorado: The Buffaloes finished the road portion of their conference schedule 3-6 but still have a chance at a bye in the conference tournament with the final three conference games at home.

Washington: The Huskies will wrap up the No. 1 seed in the conference tournament with one more win or losses by Oregon State and Arizona State. ... Washington played without starting forward Hameir Wright, who returned to the East Coast to deal with a personal matter. Dominic Green started in Wright's place. Hopkins did not have a timeline on when Wright may rejoin the team.

Thybulle trails Payton by 20 steals for the all-time Pac-12 mark. Payton had 321 in his career at Oregon State. Thybulle passed former Stanford guard Brevin Knight for second place with his six steals.

Colorado: The Buffaloes return home and host Utah next Saturday.

Washington: The Huskies begin their final road trip of the regular season at California on Thursday.