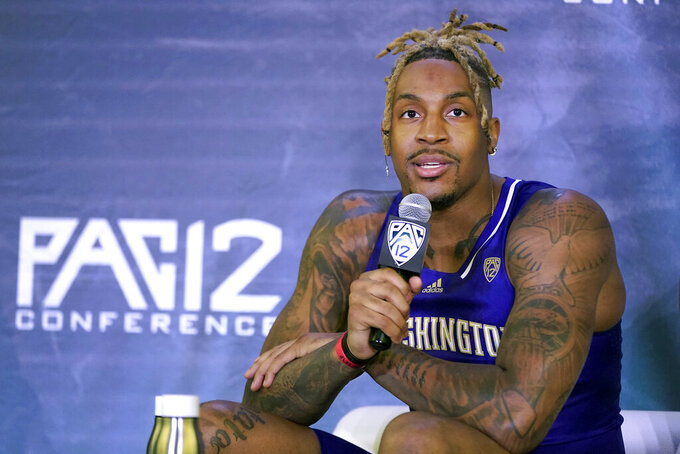 SEATTLE (AP) — Nearly everything is new for coach Mike Hopkins and Washington.

A full overhaul was probably needed after two straight seasons during which Washington occupied the Pac-12 basement.

It can be viewed as a refreshing start for the Huskies entering a new season.

But it can also be viewed as highly concerning that entering the fifth season of Hopkins’ tenure, the Huskies have dropped so much they needed such drastic changes.

“That’s what’s been exciting so far is the new energy, the new staff, the new players, and teaching them and learning them and that experience,” Hopkins said.

The new group features five transfers to go along with returning starters Nate Roberts and Jamal Bey and a couple of highly regarded freshmen. But despite a lot of talent and experience, it’s still a group with major unknowns entering a critical season in Hopkins’ tenure.

Another down season could result in even more changes to the Huskies program. There’s little belief the Huskies are going to mount a turnaround; they were picked 11th in the Pac-12 preseason poll.

“We’re just really excited. There is great energy. We added experience. We’ve got length and athleticism,” Hopkins said. “And still have a long way to go because we’re learning a new system.”

Washington’s five transfers all need to be immediate contributors. Emmitt Matthews Jr. started 55 games the past two seasons at West Virginia. Daejon Davis averaged 10.2 points over four seasons at Stanford but was limited his final year because of injury. Terrell Brown Jr. starred at Seattle before transferring to Arizona for one season and then returning to his hometown to play for the Huskies. P.J. Fuller started 18 games last season at TCU before choosing to return to his hometown.

Of all the Huskies transfers, the most important could end up being junior college star Langston Wilson. Washington doesn’t have much size on the interior outside of Roberts and 7-foot-4 center Riley Sorn. The 6-9 Wilson and his athleticism will be an important presence on the interior.

Bey and Roberts are Washington’s most experienced returners. Bey averaged 10.3 points and 31 minutes per game last season, while Roberts added 5.2 points and 5.7 rebounds. Both need to raise their production this season to help make up for the scoring Washington lost with the departures of Quade Green (15.4), Marcus Tsohonis (10.4) and Erik Stevenson (9.3).

Roberts, specifically, must do better at staying out of foul trouble as one of Washington’s few post players. Roberts played just 22 minutes per game last season.

“For me, coming off of last year my role is kind of the same -- being a leader, being a guy that’s an anchor in the middle down low,” Roberts said. “But for the new guys coming in we’ve got a lot of new faces, a lot of new roles that have to be defined.”

While the Huskies are heavy on veterans among their bevy of transfers, they are also high on a pair of freshmen who can provide size. Jackson Grant is a 6-10 forward who was a McDonald’s All-American as a high school senior. Samuel Ariyibi is a 6-8 forward from Nigeria who came through the NBA Africa Academy.

Washington lacks any big home nonconference games but will have a very telling stretch in early December with consecutive games at Arizona, home for No. 2 UCLA and at No. 1 Gonzaga. Those three games will be an excellent early indicator of how well all the new pieces are meshing together. The Huskies open the bulk of their conference schedule on Dec. 29 at rival Washington State.