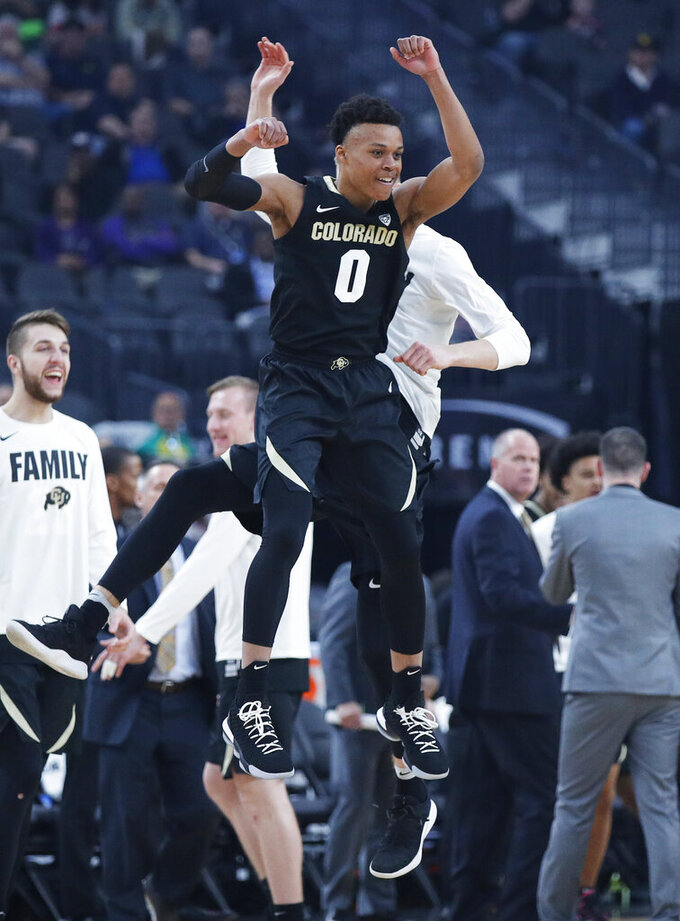 Colorado's Shane Gatling (0) celebrates after a play against Washington during the first half of an NCAA college basketball game in the semifinals of the Pac-12 men's tournament Friday, March 15, 2019, in Las Vegas. (AP Photo/John Locher) 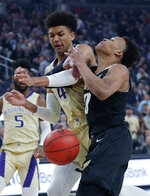 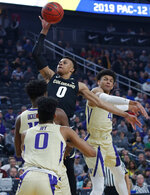 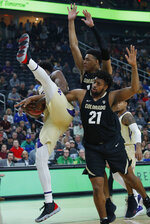 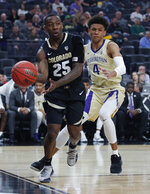 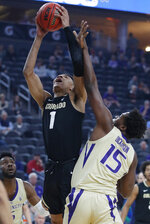 LAS VEGAS (AP) — Washington labored at both ends through most of the first half against Colorado, unable to hit shots or get its vaunted defense rolling.

Once the Huskies started swarming, the Buffaloes didn't really have an answer.

Jaylen Nowell and Nahziah Carter scored 14 points apiece, and Washington held off a late Colorado rally for a 66-61 victory in the Pac-12 tournament semifinals Friday night.

"We just challenged these guys to play defense," Huskies coach Mike Hopkins said. "Our guys battled. They played hard. That's why we win, has been our defense all season."

The top-seeded Huskies led by 14 before the Buffaloes cut the lead to 60-56 with 1:01 left. McKinley Wright hit a 3-pointer with 17 seconds left to cut Washington's lead to three, but the Buffaloes let David Crisp get behind them for a breakaway layup to seal it.

After struggling in the first half, Washington (26-7) kicked its long-armed, swarming defense into a faster gear and the fifth-seeded Buffaloes (21-12) had trouble handling it.

Colorado shot 2 of 16 from 3-point range in the second half and had 18 turnovers overall, leading to 24 Huskies points.

"Something we struggled with is maintaining leads and being able to step on guys' throats when we get going," Washington guard Matisse Thybulle said. "And I think it showed a little bit today, we weren't going to let up."

Washington had 13 steals and held the Buffaloes to 32 percent shooting to earn a spot in Saturday night's title game against Oregon.

Tyler Bey had 22 points and 16 rebounds, but Wright was held to seven points on 1-of-10 shooting.

"Our defense, our rebounding was really good this whole tournament, but tonight our offense and taking care of the ball wasn't good enough," Colorado coach Tad Boyle said. "I don't know if fatigue was a factor not. We're not certainly going to use that as an excuse."

The Buffaloes were looking to recapture the magic of 2012, when they won four games in four days to win the Pac-12 title.

Colorado climbed the first two rungs in Las Vegas, grinding out a low-scoring win over California, then outlasting Oregon State after blowing most of a 21-point lead.

Washington's zone gave the Buffaloes all kinds of trouble in two regular-season meetings. The Huskies opened with 12 straight points in a seven-point win in Boulder and led by up to 15 in a nine-point win in Seattle.

The Buffaloes got off to a much better start in Round 3.

Colorado handled Washington's defensive pressure without much trouble and used a pair of 8-0 runs to lead 33-27 at halftime.

Washington missed its first five shots and went 4 for 15 from the 3-point arc, but held Colorado scoreless for a nearly four-minute stretch to keep the Buffaloes close.

The Huskies kept their defensive mojo going into the second half.

Contesting shots and jumping into passing lanes, Washington shut the Buffaloes down, going on a 10-0 run to go up 43-35. Colorado missed its first nine shots of the second half and had four turnovers against Washington's pressure.

"You don't want to oversimplify the game, but sometimes you have to make shots," Boyle said. "Especially when they move around, they fly around, you get open looks, you've got to be able to knock them down."

Colorado had a good run at the Pac-12 tournament, but its late-game comeback against the Huskies came up short.

Washington showed why it was the Pac-12's best defensive team with a dominating second-half performance.

Colorado should have a decent shot at a smaller postseason tournament.