Washington hopes to take another step toward top of Pac-12 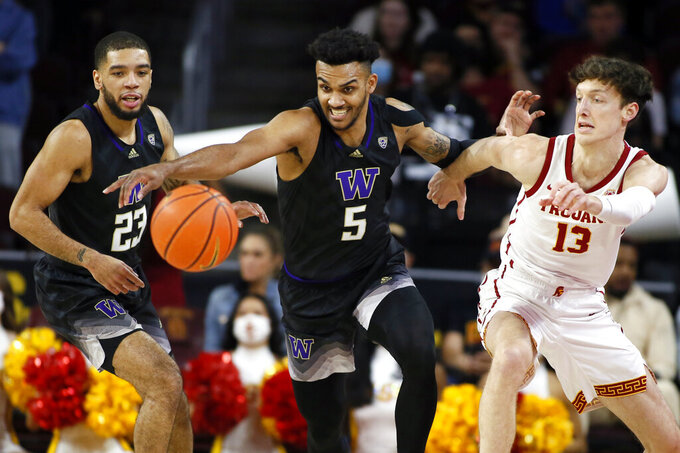 SEATTLE (AP) — By the end of last season, Washington coach Mike Hopkins believed the Huskies were on an upward trajectory.

Washington won 11 conference games — the second-most by the Huskies in the previous 10 seasons — and finished tied for fifth in the Pac-12.

But keeping that momentum going into this season will mean relying on another set of new players combining with some key holdovers if the Huskies are to inch their way closer to the top of the conference.

“The potential is there to be really good, but it’s a work in progress,” Hopkins said. “We’ve got some great pieces. Really excited about that, but we’ve got to come together, got to implement the system, those types of things. But I feel very optimistic.”

Rejoining the Pac-12 elite would be the optimal scenario for Washington and perhaps the one that Hopkins needs. After a splashy performance in his first two seasons, the Huskies have not lived up to expectations, leading to questions about Hopkins’ job security.

Washington went 17-15 overall last season before losing in the quarterfinals of the Pac-12 tournament. It was a significant improvement after the Huskies went 5-21 in the 2020-21 season, but the program has struggled since reaching the NCAA Tournament in 2019.

“Being 17-15 is obviously not our standard. It’s not where we want to be. We want to be playing in the postseason and competing,” Hopkins said. “But we won 11 games in the league after struggling. ... We were picked second-to-last and came in fifth, tied, so there was a lot of positives and I want to focus on those.”

Washington’s returnees are highlighted by wing Jamal Bey and guards P.J. Fuller and Cole Bajema. But that trio combined for just 22 points per game last season and will need to take on bigger scoring rolls as the Huskies try to fill the void left by the departure of Terrell Brown Jr., who led the Pac-12 averaging 21.7 points last season.

Some of that scoring may fall to Kentucky transfer Keion Brooks. The 6-foot-7 forward scored a career-best 10.8 points per game last season for the Wildcats. The Huskies are also counting on contributions from Noah Williams, who transferred from rival Washington State.

The transfer portal seems to have become Washington's primary recruiting avenue for the past couple of seasons. Last season the Huskies got Brown, Daejon Davis, Emmitt Matthews Jr. and Fuller. Brown, Davis and Matthews are gone, but Washington replenished.

Brooks was the biggest acquisition. He started all 33 games last season for the Wildcats and averaged double-figure scoring for the second straight season.

Williams was a surprise in making the jump from Pullman to Seattle. Williams averaged 14.1 points two seasons ago with the Cougars, but shot just 33% from the field last year and saw his scoring and minutes decrease.

One thing Washington has to address is size and depth on the inside. The Huskies brought back athletic 6-foot-9 forward Langston Wilson but also added 6-foot-11 Franck Kepnang from Oregon and 7-footer Braxton Meah from Fresno State. Another key will be the development of 6-10 forward Jackson Grant, who played limited minutes last season as a freshman.

That extra size in the middle should help both in rebounding and on the defensive end.

“We have size and athleticism,” Hopkins said. “We had a lot of games last year we had to play really small.”

Bey is Washington’s most experienced player, beginning the season with 119 career games played. While he's a solid defensive player, Washington needs better shooting from Bey, who shot 34% from the field and 31% on 3s last season.

Fuller is likely to be the Huskies' starting point guard and saw his role increase as last season progressed, while Bajema is a streaky shooter.

Washington’s nonconference schedule is rather underwhelming. The Huskies will play in the Wooden Legacy in November with the chance of a matchup against Saint Mary’s or Vanderbilt in the final. The two marquee nonconference matchups come in December with a game at No. 2 Gonzaga and at home against No. 15 Auburn.

In conference play, the Huskies play seven of their first seven Pac-12 games at home and face the Oregon schools only once.