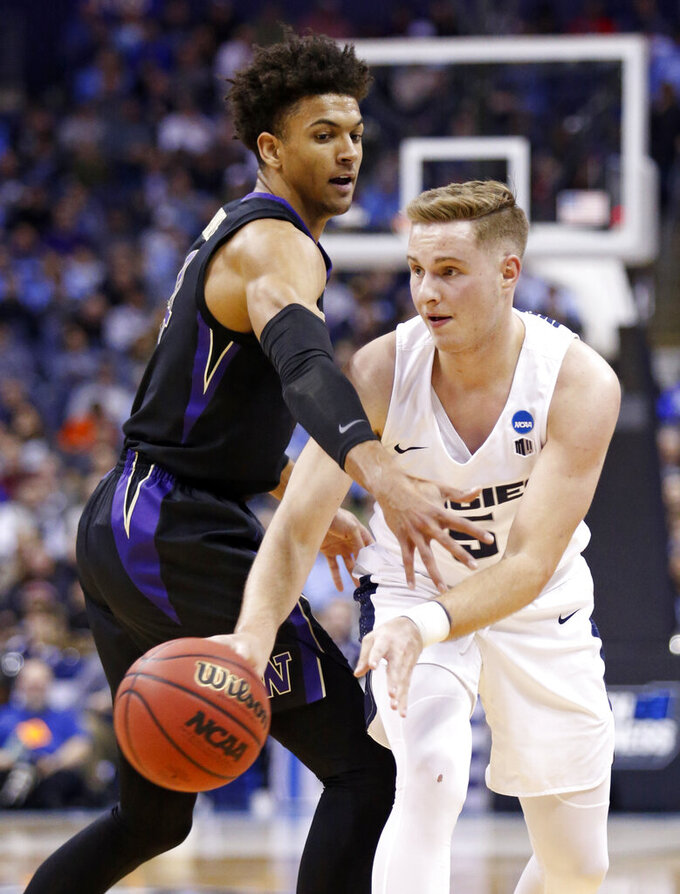 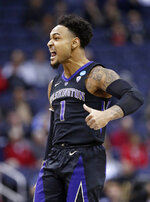 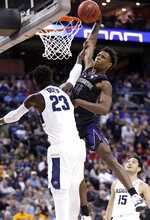 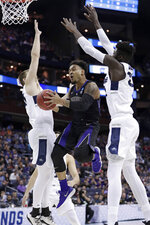 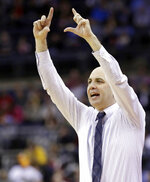 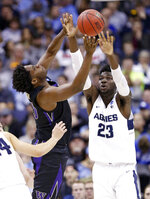 COLUMBUS, Ohio (AP) — Eight years had gone by since Washington made an NCAA Tournament bracket. The Huskies' award-winning players made their return successful.

Noah Dickerson had 20 points and 12 rebounds, and ninth-seeded Washington pulled away at the end to a 78-61 victory over Utah State on Friday.

The Huskies (27-8) finally got back to the tournament, and they got a win, too .

"It feels really good, actually," Dickerson said. "When I was a little kid, I used to watch this tournament all the time hoping one day I would have a chance to play in it."

The Pac-12's regular season champions swept the league's awards — top player, best defensive player and coach of the year — and got something from all of them against one of the hottest teams in March.

Eighth-seeded Utah State (28-7) had won 10 in a row and 17 of 18 while taking the Mountain West title. The Aggies got the highest seed in school history and were trying to end their own long NCAA Tournament drought. They haven't won since 2002, dropping eight in a row — including 2006 against the Huskies.

"It's been a good year for us, definitely, getting Utah State back to where Utah State basketball needs to be," said Sam Merrill, who had 10 points. "But obviously this is still very disappointing. We felt like this was a real opportunity to make that next step for this program."

Washington followed the lead of its top players.

Jaylen Nowell, the Pac-12 player of the year, had 19 points and five assists. Top defender Matisse Thybulle helped the Huskies surge ahead to stay late in the first half but was limited by foul trouble the rest of the way. He finished with 10 points, five steals and three blocks.

Pac-12 Coach of the Year Mike Hopkins got a $17.5 million extension through 2025 on the eve of the game, and then led the Huskies to their long-awaited win.

"It's a feeling you never want to give away," Hopkins said. "And so this elevates where we want to be."

Thybulle helped the Huskies build the game's first significant lead. He hit a 3-pointer and had a steal and dunk during a 13-3 run that ended the first half and put Washington ahead 40-28. Thybulle also had an emphatic block on Abel Porter's jumper from the perimeter.

The Huskies pushed the lead to 13 points early in the second half before Thybulle went to the bench with his third foul. Utah State cut it to 54-53 on Sam Merrill's 3-pointer, but Nahziah Carter hit back-to-back 3s that blunted the comeback. Washington was never seriously threatened down the stretch.

Washington: The Huskies haven't won two games in the tournament since 2010, when they lost to West Virginia in the Sweet 16.

Utah State: The Aggies had a breakthrough season, getting ranked in Top 25 for first time in eight years. Their 28 wins were third-most in school history.

Utah State's Brock Miller got a bloody nose in a scrum for a rebound late in the first half and went to the bench. He returned in the second half and finished with 13 points and five rebounds in 27 minutes.

Washington guard David Crisp fouled out with 8:16 to go. Thybulle picked up his fourth foul with 7:07 left but finished the game.

Merrill was MVP of the Mountain West Tournament, averaging 23 points. The Huskies focused on following him every time he cut to the basket. Merrill missed all of his three shots in the first half and finished with 10 points on 2-of-9 shooting.

QUOTE OF THE DAY

Hopkins on how it's different being a head coach than an assistant in a big game: "Do you see my hairline? I lost a lot of real estate the last two years and a lot of sleep. But you know what, listen, I've dreamt my whole life of being in this position. When you dream it and you get an opportunity, it's special, I can't lie to you."