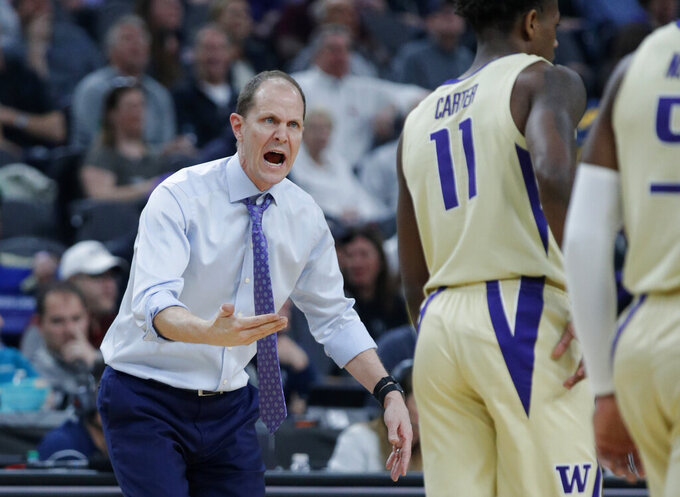 Washington head coach Mike Hopkins speaks with his players during the first half of an NCAA college basketball game against Colorado in the semifinals of the Pac-12 men's tournament Friday, March 15, 2019, in Las Vegas. (AP Photo/John Locher)

COLUMBUS, Ohio (AP) — Washington has rewarded coach Mike Hopkins for getting the Huskies back to the NCAA Tournament by giving him a contract extension worth $17.5 million through the 2025 season.

The ninth-seeded Huskies open the NCAAs on Friday against No. 8 seed Utah State. It's Washington's first appearance in the tournament since 2011.

"I've always believed in surrounding yourself with great people. And I have that at the University of Washington," Hopkins said Thursday. "I'm excited to be there for a long time. But this is all about the kids. This is the experience for the kids to have an opportunity to hopefully finish out what has been a successful season. It's not about me. It never has been."

Hopkins is 47-21 in his two seasons at Washington and has turned around a program that won nine games the year before he arrived. He's twice been named the Pac-12 coach of the year and the Huskies ran away with the Pac-12 regular-season title this year.

If Washington wins a Pac-12 championship or qualifies for the NCAA Tournament before the end of the 2022 season, the contract would be extended through the 2025-26 season.

"Not only has coach Hopkins made an immediate impact on the on-court success of our men's basketball program, but he has fully embraced this campus and the entire city of Seattle," Washington athletic director Jen Cohen said. "I look forward to seeing the difference he continues to make in the lives of our incredible student-athletes and in this incredible city."