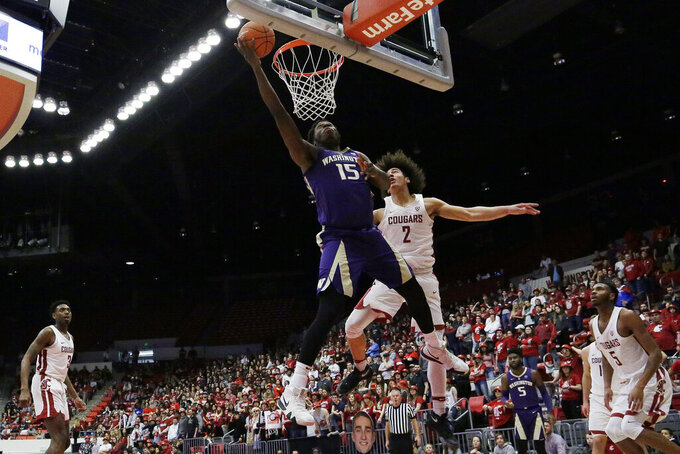 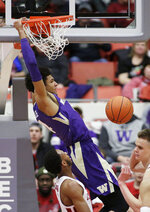 "Dickerson has been big for us. He always has been. Guys have been doing a good job getting him the ball," Washington coach Mike Hopkins said. "I thought in the first half they doubled and he would pass it out to get wide open 3s. You just have to trust it I know it is a little bit boring but sometimes boring is good."

Washington came out of the second half with a 7-0 run over 1:57 sparked by a jumper from Nowell. Dickerson added a layup and Hameir Wright knocked down a 3 completing the run and forcing the Cougars to call a time out.

Washington would go on a 13-3 run spanning five minutes after several layups from Dickerson and a 3-pointer from Dominic Green to tie the game at 54 with 9:57 remaining.

Franks knocked down a 3-pointer for WSU to take a 67-65 lead with 2:46 remaining. The Pac-12 leading scorer wasn't a factor until late in the ball game.

"We made an adjustment to keep the ball out of the high post while guarding Franks, I thought that really helped," Hopkins said. "They scored 45 points in the first half and they scored 25 in the second half and they hit three 3s with two minutes to go."

Dickerson was fouled on the next possession making 1 of 2 free throws to cut the deficit to one. David Crisp then stole the ball, setting up the fast break and a 3-point play for Nowell that gave the Huskies the lead for good at 69-67.

Hopkins said experience and veteran leadership is how the Huskies pulled away with a victory in the closing minutes of the game.

"Our experience at the end really helped. I thought that was big," coach Hopkins said. "We just had to calm down a little bit. We got down early and they were shooting the ball well. In the first half our energy levels just didn't seem like they were there."

The Huskies trailed most of the first half as WSU had all of the momentum in the early going.

Cannon dominated the first half for WSU with 18 points, throwing down crowd-energizing dunks and acrobatic layups.

Washington answered an 8-0 Cougar run at the 9:57 mark in the first half after Matisse Thybulle threw down two dunks underneath the rim and Nowell hit a 3-point jumper completing the 7-0 run for the Huskies over 1:53.

WSU fought back with a 10-0 run sealing momentum for the half. CJ Elleby started the run with a tough back door pass to Jeff Pollard for the layup and Pollard returned the favor on the next possession hitting Elleby for a fast-break layup and foul.

Elleby completed the 3-point play and Cannon was fouled on a 3-point attempt on the next possession knocking down all three free throws. Ahmed Ali finished the run with two made free throws.

"We tried to make some plays that we didn't need to make," Washington State coach Ernie Kent said. "We lengthened the game when we should have been focused on shortening the game. To their credit they just took advantage of our miscues."

Washington extended the all-time series lead to 185-104 over WSU as the Huskies swept the Cougars for the second season in a row under coach Hopkins.

"I love it," Hopkins said. "I thought it was a great environment. I think the last time we played here the students might have been on break and it was really good to experience."

Washington: The Huskies handled business as expected, bouncing back after falling to Arizona State, their first Pac-12 loss of the season. The win against the Cougars comes at an important time since the Huskies are battling for the No. 1 seed in the upcoming Pac-12 tournament.

Washington State: After beating both Arizona and Arizona State for the first road sweep since the 2008-09 season, the Cougars disappointed late at home against their rivals. The loss to Washington cements the Cougars second-to-last placement in the conference.

Washington: The Huskies will travel home to play Utah on Wednesday.